The volunteers are accused of sending voters state election documents with incorrect information. 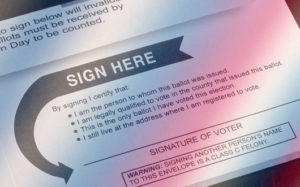 “Making or using an altered form is a criminal offense under Florida law,” wrote Bradley McVay, the Florida Department of State’s lawyer.

Altered dates were entered on official forms on mailed absentee ballots. The forms were due by 5 p.m. on Nov. 5, but records released by Florida officials show voters in four counties submitted altered forms that show the ballots could be returned by Nov. 8.

The type of form in question, known as a “vote-by-mail cure affidavit,” is used by voters who forgot to sign a “vote-by-mail certificate” when they returned their ballots, or whose signatures do not match those on file with their voter-registration records, according to Florida’s Division of Elections website. Voters must return them with a copy of identification.

“More fundamentally, altering a form in a manner that provides the incorrect date for a voter to cure a defect (or an incorrect method as it related to provisional ballots) imposes a burden on the voter significant enough to frustrate the voter’s ability to vote,” McVay said.

“Please pass the word to the FDP that they can’t arbitrarily add their own deadline to your form for [absentee ballot] cures! This is crazy!!” Okaloosa Supervisor of Elections Paul Lux wrote in a Nov. 8 email to Maria Matthews, who serves as division director for the Secretary of State’s Office.

Susan Gill, the elections supervisor in Citrus County, alerted Florida election officials to an altered form sent by a voter. Gill says the woman received a call from a number, linked to the state Democratic Party, before she was sent a form that was altered.

“It was a very unusual thing to have happened, which is why I reported it,” Gill said. She said it was the only irregularity in her county that she reported to officials.