The Florida legislature on May 1 passed a bill allowing teachers to carry guns in the classroom.

Florida’s House of Representatives voted 65 to 47 to pass the bill. Florida’s Senate approved it 22 to 17 last week. 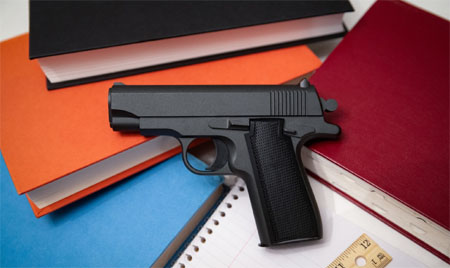 Gov. Ron DeSantis, a Republican, is expected to sign the bill into law.

Gun-control advocates in the state pushed to stop the legislation. Among them were Moms Demand Action For Gun Sense, which is funded by billionaire and former New York City Mayor Michael Bloomberg.

The legislation allows school districts wishing to take part in the voluntary Guardian program to arm teachers who pass a 144-hour training course.

In anticipation of the law’s passage, school employees in 40 of Florida’s 67 counties had already enrolled in or planned to take the 144-hour course, according to a spokesman for state Speaker of the House Jose Oliva. Some counties have said they would not to participate in the Guardian program.

“Contrary to what the groaners on the left will say,” the new legislation “means Florida is poised to become one of the safest states in the nation for little kids and teens to go to school,” columnist Cheryl K. Chumley wrote for The Washington Times on May 2.

“The naysayers can naysay. (One late-night legislative protest, for instance, focused on what The Washington Post summarized as ‘an explosive debate on racial bias’ of the right-to-carry law). The naysayers, in fact, naysay all the states that allow school officials to bring firearms onto campus to protect students and staffers,” Chumley noted.

“But the fact is: We live in a world where mental illness is rampant, where violence is masked as entertainment, where legal and illegal prescription drug use has resulted in deranged behaviors, where broken homes bring forth dysfunctional kids, where the rotten culture breeds low and no tolerance for absolutes, for rights versus wrongs — where God has been removed from most of the public arena. And one of the consequences of this world has been shootings in schools that have killed and harmed innocents,” Chumley wrote.

The availability of guns is not the problem in school violence, Chumley stressed — “it’s a problem with hearts and minds and souls. Until we treat it as such — until we treat the shootings and violence and attacks and killings as the sicknesses of the mind and soul they are — then we’re really only treating symptoms.”

Chumley concluded: “When a gun-toting individual with the intent of killing enters a school, it’s too late to treat his or her twisted mind, blackened heart, darkened soul. The only way to fight and save innocents is with a gun.”