Fight to the death: Rogue DOJ vs. the man Americans elected president

Special Counsel Robert Mueller is closing in on President Trump. And if Trump doesn’t fight back — and soon — he will be facing impeachment. 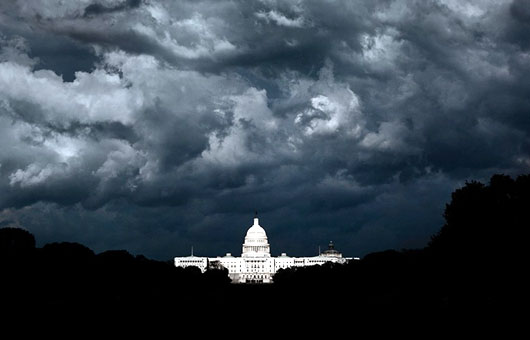 Trump’s former campaign chairman, Paul Manafort, has been found guilty of 8 counts of tax and bank fraud. He is also staring at spending years in prison.

Mueller’s goal is to chop down people who were close to Trump, slowly chipping away at his credibility and authority. Neither of those two cases has anything really to do with the crimes committed by Manafort or Cohen. The real objective is to go through them to get to the big prize: the president. Mueller wants to squeeze them, thereby forcing them to turn on Trump in the hope that they have incriminating evidence.

Take Manafort. Does anyone seriously believe that he would ever have been prosecuted if he hadn’t been Trump’s campaign chair for four months? Mueller’s prosecutors threatened Manafort with over 300 years in jail — essentially, for tax evasion. Murderers and rapists don’t get that long of a prison sentence. Typically, tax fraud — if it’s even prosecuted at all — will get someone a year to 15 months behind bars. Manafort may now spend the rest of his life in the slammer. Moreover, his ex-partner, Rick Gates, committed the very same financial crimes as Manafort — money laundering, tax and bank fraud, funneling cash to offshore accounts. In fact, he pleaded guilty to two counts of financial fraud and lying to investigators. Gates’ time, however, in prison: zero, not even a minute, not even a millisecond. The reason: Mueller decided to grant Gates blanket immunity in order to be his “star” witness against Manafort. Gates walks, Manafort doesn’t. The difference is Gates has nothing to give on Trump.

It won’t. But that’s not the point. Mueller is a creature of the Deep State. Even before Trump’s election, the shadow government has been determined to destroy him. Why? Because Trump is a genuine outsider, who threatens the Washington establishment’s vast wealth, power and control. They are the ruling class; Trump is the rebel leading the populist insurrection. According to our political and media elites, decapitate him and his America First movement will die as well. They want to oust and impeach him.

Hence, Mueller believes that, by sending Manafort and Cohen to prison, he can taint Trump as a sleazy, corrupt leader who has been surrounded by convicted criminals. Call it guilt by association. More importantly, he wants to leverage these cases to pressure Trump into agreeing to an interview under oath. In short, Mueller is setting up a perjury trap.

This is his ultimate goal; it is the Deep State’s silver bullet. If Trump agrees to an interview with Mueller’s prosecutors, he is finished. He will be impeached. Trump’s honesty is irrelevant. He could be more truthful than Mother Theresa. It doesn’t matter.

As the famous liberal law professor, Alan Dershowitz, has warned, Mueller — not Trump — will be the arbiter of what is truthful or not. Any statement by Trump that contradicts those of James Comey, Andrew McCabe, John Brennan or even Trump’s attorney, Don McGahn (or any witness), Mueller can and will use to say the president has lied, and therefore has committed perjury and by extension, obstruction of justice. Mueller will then recommend to impeach. Trump will be in legal and political jeopardy, triggering a constitutional crisis. His presidency will be in mortal peril.

Mueller and the Democratic media believe a repeat of Watergate is possible. They want to do to Trump what was done to Nixon. Yet, there is one crucial difference: Unlike Watergate, Trump has committed no crime.

In both the Cohen and Manafort cases, not a shred of evidence was produced regarding Russian interference in the election or Trump-Russia collusion — the very basis of Mueller’s appointment as special counsel. Cohen and Manafort are collateral damage in Mueller’s war against Trump. Only if he puts himself under oath can the special counsel nail a serious crime into the president’s chest.

Mueller, the Democratic-media complex and their Deep State allies will not stop until Trump is driven from office. They are slowly reducing his presidency to rubble, paralyzing his administration and making it increasingly difficult for him to do his job or advance his agenda (especially, building the wall and securing our southern border.) He needs to start playing hardball.

It’s time to get rid of Attorney General Jeff Sessions and replace him with a brave patriot, who is not afraid to regain control of the rogue Justice Department and FBI, and finally put an end to Mueller’s witch hunt.

Trump and Mueller are in a political death struggle; only one man will emerge victorious. What are you waiting for Mr. President?

Fight to the death: A rogue DOJ vs. the man Americans elected president, Jeffrey Kuhner, WorldTribune.com