Vice President Mike Pence said Trump had been stern with Erdogan on the phone and the vice president said he would soon travel to the region in an effort to mediate the crisis that has seen more than 160,000 civilians flee their homes in the area, Radio Free Europe/Radio Liberty (RFE/RL) reported on Oct. 15. 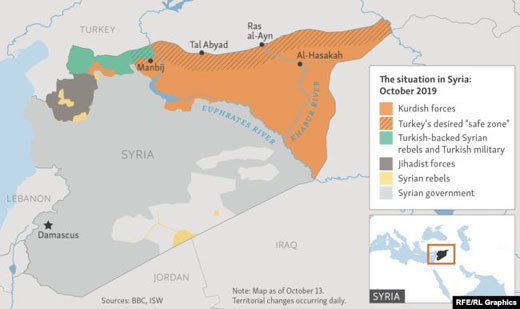 “The United States of America simply is not going to tolerate Turkey’s invasion in Syria any further. We are calling on Turkey to stand down, end the violence and come to the negotiating table,” Pence told reporters as quoted by Reuters.

Pence’s imminent travel announcement came a few hours after Trump said he would soon issue an executive order authorizing sanctions against Turkey’s officials, end negotiations with Ankara on a $100 billion trade agreement, and boost tariffs on Turkish steel to 50 percent in response to the country’s offensive on northeastern Syria.

“I am fully prepared to swiftly destroy Turkey’s economy if Turkish leaders continue down this dangerous and destructive path,” Trump said in a statement on October 14, after the United States, the Syrian Kurds’ main ally, announced it would withdraw troops from the country.

Though Trump’s decision to pull U.S. forces out of Syria as been roundly criticized by Democrats and their media allies, and several hawkish Republicans, several pro-military pundits approved of the president’s move.

“President Trump’s actions on Syria are generally consistent with his campaign positions. He wanted to crush ISIS and get out,” J.D. Gordon, a former Pentagon spokesman and Trump campaign national security adviser, told The Washington Times.

“While the clash between our Turkish and Kurdish allies is obviously terrible, armed conflict between them has been going on for decades,” Gordon said. “Since we are $22 trillion in debt and rising, we should not be the world’s policeman forever. If there is any border that must be a priority to defend, it’s our own.”

Retired Navy Capt. Chuck Nash also endorsed the Syria withdrawal. “Where is the ISIS caliphate now? It’s gone,” he said on Fox News. “Now that that is done, why are we there?”

Nash said Turkey eventually may fall into a trap by inciting millions of Kurds in the region.

“As these forces realign … you’re going to have a much broader, more potent force facing the Turks and the massive Kurdish population inside their borders,” he said. “They have bit off a lot, and this could blow up in their face.”

Buck Sexton, a former CIA analyst and a Trump defender on social media and TV, tweeted his support of the president’s move.

“Around 500,000 human beings were killed in Syria while Barack Obama was president and leading for a ‘political settlement’ to that civil war,” Sexton wrote. “Media has been more outraged in the last 72 hours over our Syria policy than they were at any point during 7 years of slaughter. Ask why.”

“We have spent almost two decades in Afghanistan, Iraq, Syria, Yemen and North Africa chasing terrorists,” he told The Washington Times, referring to the post-9/11 priorities against Islamic extremists. “Those fights will continue with or without our full support. We must minimize that drain in order to refocus on what’s most important, which is deterring China and Russia.”

The Chinese “are rapidly [matching] and in some areas exceeding U.S. military capabilities, and based on [President Xi Jinping’s] rhetoric, the Asian giant intends to make his nation the world’s military hegemony by the regime’s 100th anniversary” in 2049, Maginnis said.

Erdogan on Oct. 14 said: “We are determined to continue the operation until the end, without paying attention to threats. We will absolutely finish the job we started. Our battle will continue until ultimate victory is achieved.”

Syrian government forces have reportedly started to reach positions in the north of the country after the Assad regime agreed to help Kurdish militias facing the Turkish assault.

In his statement, Trump said the roughly 1,000 U.S. troops he had ordered to leave Syria will remain in the Middle East to prevent a resurgence of the Islamic State (ISIS) threat.

He also confirmed that a small number of troops will remain at a base in southern Syria.

Troops also reached Tel Tamer and Ain Issa to the east of the river, two towns located on a strategic highway running south of the Turkish border, reports said.