Feminist group at Duke U. offers ‘safe space’ for ‘male-identified’ students to ponder ‘toxic masculinity’ and other gender themes

Duke University is urging Y-chromosomers to contemplate just what kind of people they are.

The Duke Men’s Project, a program sponsored by the Duke Women’s Center, is offering males a “safe space” for a lecture series on “toxic masculinity”. 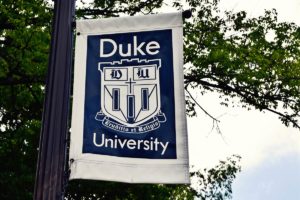 “Toxic masculinity encourages men to suffer in silence from depression,” according to The Chronicle, Duke’s student newspaper.

“The Men’s Project is novel because it provides males a space in which they can discuss their own gender,” The Chronicle explained.

“It is not a reeducation camp being administered by an oppressed group in the service of the feminization of American society, but rather a space by men and for men.”

The lecture series will include an address by pornography expert Matthew B. Ezzell entitled “Pornography makes the man.”

“This next Tuesday, we welcome Dr. Matt Ezzell back to campus for this awesome talk on pornography, masculinity, and rape culture,” The Duke Men’s Project Facebook page announces. “Free food! Bring your friends!”

The “male-identified students” participating in the Men’s Project “meet weekly to discuss themes and learning objectives planned by the leadership team,” Duke junior Dipro Bhowmik, a leader of the initiative, told The Chronicle.

Bhowmik, who goes by the name “Dabba Baz” on Facebook, officially likes Duke Figure Skating, the LGBTQ Center of Durham, Lizzy the Lezzy, Bitch Media and Charlotte Uprising (a group related to the recent spate of police protests in North Carolina), according to a report by The Daily Caller.

Neither Duke nor North Carolina appears to be offering a lecture series on “toxic femininity” this year.

Feminist group at Duke U. offers ‘safe space’ for ‘male-identified’ students to ponder ‘toxic masculinity’ and other gender themes added by World Tribune on October 4, 2016
View all posts by World Tribune →