The world’s top female chess players will have to sacrifice more than pawns at the 2017 world championships in Iran.

Many of the players reacted with shock after being told they must compete for the world title while wearing a hijab. They accused Fide, the game’s governing body, of failing to stand up for women’s rights. 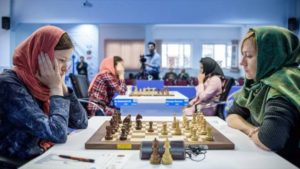 Any woman found not wearing a hijab in public faces arrest, a fine or public admonishment. The law is strictly enforced by the Islamic Republic’s “morality police”.

Fide’s Commission for Women’s Chess, meanwhile, called on the 64 participants in the championship tournament to respect “cultural differences” and accept the regulations.

“It is absolutely unacceptable to host one of the most important womens’ tournaments in a venue where, to this day, women are forced to cover up with a hijab,” said Nazi Paikidze, the U.S. women’s champion.

“I understand and respect cultural differences. But, failing to comply can lead to imprisonment and women’s rights are being severely restricted in general.”

Nigel Short, the British former world title contender, said: “There are people from all sorts of backgrounds going to this, there will be atheists, Christians, all sorts of people. If you are deeply Christian why would you want to wear a symbol of Islamic oppression of women?”

Meanwhile, the U.S. State Department has issued a warning about traveling to Iran saying citizens risk being unjustly imprisoned or kidnapped because of their nationality.

“It does not feel safe for women from around the world to play here.” Paikidze said. “I am honored and proud to have qualified to represent the United States in the Women’s World Championship. But, if the situation remains unchanged, I will most certainly not participate in this event.”