Illustrating how sanctuary policies shield dangerous criminals, federal agents captured 141 illegal immigrants in just a few weeks simply by using fingerprints from local drunk driving arrests in one region of the U.S. The operation took place recently in New England, well known for protecting illegal aliens from federal authorities by offering sanctuary through local policies. This includes the entire states of Maine, Vermont and Massachusetts as well as cities in Connecticut and Rhode Island.

In all the cases the illegal immigrants were released into various communities after driving under the influence, according to a high-ranking federal official quoted in a news story published this month in Boston’s conservative newspaper. The official, Todd Michael Lyons, is the deputy field director for Immigration and Customs Enforcement (ICE) in Boston and he says local judges and prosecutors are helping illegal immigrants dodge deportation by not reporting drunk drivers to the feds. 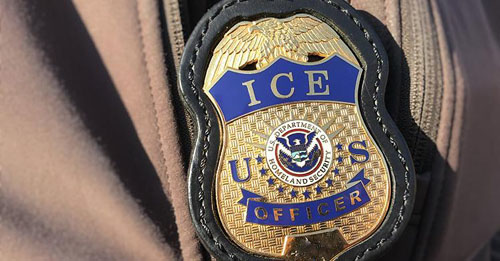 “We saw a large number of people with charges dropped down,” Lyons says in the article, adding that “it’s frustrating” and happening throughout New England. “Driving under the influence is a dangerous threat regardless of what country the offender is from,” the ICE director says. “It’s even more disturbing crime when it’s committed by someone who has no legal right to be in this country.”

Among those nabbed in the recent sting, coined Operation: Secure Streets, were a Kenyan national living illegally in Lowell, Massachusetts with pending rape, robbery and strangulation charges. Others include a Honduran in Boston accused of selling cocaine and a Ukrainian in Cambridge with multiple drunk driving convictions.

A previously deported Salvadoran man living in Malden with aggravated assault on a police officer and forgery charges was also arrested in the recent operation as well as a Guatemalan man in New Bedford charged with aggravated assault and wanted for resisting an officer. The Salvadoran man, identified as being 43 years old, also helped a prisoner escape, according to the feds. In a similar sting last year, federal agents arrested dozens of illegal immigrants in the region wanted for dealing drugs.

Local governments that offer illegal immigrants sanctuary have long defied federal orders by releasing criminal aliens — rather than turn them over for deportation — incarcerated for state crimes. In one recent year alone, ICE reported that sanctuary jurisdictions protected nearly 12,000 criminal illegal immigrants throughout the U.S.

During that period more than 17,000 federal detainers were rejected by the sanctuary jurisdictions and around 11,800, or 68 percent, were issued for individuals with a prior criminal history. In the last few years however, some local governments have taken it a huge step further by actually passing local measures to help illegal immigrants charged with local crimes escape federal custody.

Among them is New York where a few years ago the attorney general issued legal guidance to help municipalities throughout the state provide sanctuary for illegal immigrants. It set a dangerous precedent because it marked the first time a top law enforcement authority, a veteran elected official, actively encouraged and assisted local governments to violate the law.

Nearly a dozen New York municipalities — ranging from sleepy towns like Newburgh to larger cities such as Rochester as well as Albany, the state capital — followed the directive to skirt federal law. Of interesting note is that the attorney general (Eric Schneiderman) who issued the outrageous order resigned in disgrace after being accused of physically abusing four women. The Democrat lawmaker had “made a name for himself as a champion of women’s rights,” according to media reports.

Circling back to the New England region, a few months ago a district judge in Newton, Massachusetts and a court officer got criminally charged for helping an illegal immigrant escape out of the basement door of the Newton District Court. The judge, Shelly M. Richmond Joseph, and court officer, Wesley MacGregor, were federally indicted with conspiracy, obstruction of justice and aiding and abetting.

Judge Joseph allowed the illegal immigrant wanted by federal officers to escape in order to avoid deportation, according to the indictment. The judge reportedly assured the illegal alien’s attorney that she was not going to allow ICE agents into her courtroom to arrest and deport his client.