Team Biden’s policies that allow LGBTQ+ people to use the bathroom of their gender identity goes too far, a federal judge in Texas has ruled. 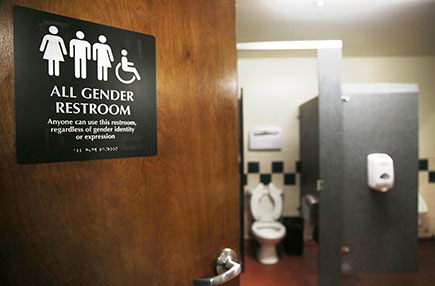 In 2021, Team Biden’s Equal Employment Opportunity Commission issued guidance which requires employers to allow employees to use whatever pronouns and bathroom corresponds with their gender identity.

U.S. District Judge Matthew Kacsmaryk said that Team Biden overstepped its bounds, ruling that while Title VII of the Civil Rights Act of 1964 protects the LGBTQ+ community from discriminatory hiring practices, that doesn’t necessarily include “all correlated conduct,” such as bathroom and pronoun use.

“In Bostock, the Supreme Court held that Title VII’s ‘because of sex’ terminology should be read to prohibit ‘sexual orientation’ and ‘gender identity’ discrimination in employment,” the ruling stated. “More precisely, the Supreme Court held: ‘An employer who fires an individual merely for being gay or transgender defies the law.’ ”

In September 2021, Texas Attorney General Ken Paxton sued the Biden administration as a result of this guidance, saying it “increases the scope of liability for all employers.”

“States should be able to choose protection of privacy for their employers over subjective views of gender, and this illegal guidance puts many women and children at risk,” Paxton said in a press release. “If the Biden Administration thinks they can force states to comply with their political agenda, my office will fight against their radical attempt at social change. These backdoor attempts to force businesses, including the State of Texas, to align with their beliefs is unacceptable.”

After Judge Kacsmaryk’s ruling, Paxton stated: “The court decision is not only a win for the rule of law, but for the safety and protection of Texas children. The Biden Administration’s attempts to radicalize federal law to track its woke political beliefs are beyond dangerous. I will continue to push back against these unlawful attempts to use federal agencies to normalize extremist positions that put millions of Texans at risk.”