The FBI is investigating a pair of trips to Saudi Arabia in consecutive years taken by the Islamic terrorist who killed 49 people at the Pulse Orlando nightclub.

According to a Fox News report, the Saudi Ministry of Interior confirmed that Omar Mateen twice performed the umrah Islamic pilgrimage and that travel records showed he also visited the United Arab Emirates on one of the trips. 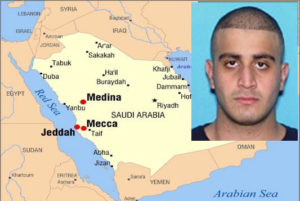 For Mateen to have made the trip to Saudi two years consecutively was highly unusual, Muslim leaders said.

“It’s not cheap to do so and people that young usually don’t go twice,” said Adnan Khan, former leader of the Council of Pakistan-American Affairs. “And especially considering he appeared not to have come from a staunchly religious background.”

One umrah is usually enough for a Muslim, said Timothy Furnish, an expert in Islamic history and consultant to the Pentagon.

“The fact that Mateen made two of those would suggest that he felt he had many sins needing rectifying and/or he was not engaged solely in religious activity but meeting with someone in Saudi Arabia,” Furnish said.

During the massacre at the Pulse, Mateen made multiple calls to 911, professing his allegiance to ISIL and support for the Muslim brothers who bombed the 2013 Boston Marathon, police said.

In 2011, Mateen took a 10-day trip to Saudi Arabia that was arranged by U.S.-based Islamic travel agency Dar El Salam and was a package the company calls the “Sacred Caravan Umrah.” The package costs up to $4,000 and includes four nights at four-star accommodations in Mecca and six nights in Medina, complete with buffet meals, sightseeing and religious studies and lectures.

The FBI, which searched Mateen’s residence in Fort Pierce, Fla., taking a computer and several other items, declined to comment on what investigators may have learned about the terrorist’s travels.