Dr. Anthony Fauci, Attorney General Merrick Garland and Big Tech behemoths Google, Facebook and Twitter will be targets of congressional investigations if, as expected, Republicans take control of the House of Representatives after the 2022 midterm elections, Rep. Jim Jordan said. 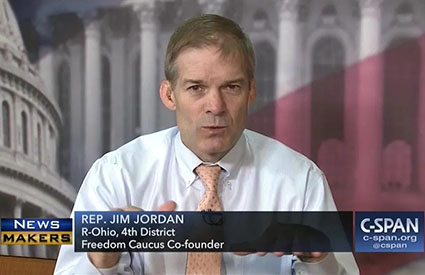 Jordan, Ohio Republican and the most likely candidate to take over the House Judiciary Committee, told Just the News that Republicans intend to press Fauci on why the National Institutes of Health (NIH) was funding research on coronaviruses at China’s Wuhan Institute of Virology through a U.S. nonprofit called EcoHealth Alliance and why NIH revived a dangerous form of experimentation known as gain of function in 2017.

“You know, Dr. Fauci knew on January 31 2020, that [the COVID-19 outbreak] most likely came from a lab,” Jordan said during an interview with the John Solomon Reports podcast. “He got an email from Dr. Christian Anderson, which said the virus looks engineered, the virus is not consistent with evolutionary theory. That is a fancy way of saying this thing came from the lab, and yet he misled us for over the last year saying, ‘Oh, no, no, no, that’s not the case.’ He got articles written and everything else. So we need to investigate that.”

Jordan said he also wants Congress to look into Garland’s order instructing the FBI to investigate parents as a domestic threat for protesting school board curriculum decisions.

“We’ve got to get to the bottom of the the school boards issue, what the Justice Department is doing, how they’re treating it,” Joran said. “This threat tag label that we got from a whistleblower they’re putting on parents is frightening as well. So those are some of the big investigations. And then, frankly, it’s going to be tough to get anything passed into law, but we should still go ahead and pass it out of the House.”

Jordan also wants continued censorship of Americans by Big Tech investigated, adding that he hopes to reform Section 230, which grants immunity from lawsuits to tech platforms.

“And you know, Joe Biden would veto it, but we need to pass section 230 [reform], which takes away the liability protection for these … Big Tech platforms who always want to squelch and censor conservatives,” Jordan said.

• The leak of a vast cache of IRS documents about billionaires to ProPublica.
• The National Security Agency’s possible monitoring or unmasking of journalists such as Fox News host Tucker Carlson.
• The record surge of illegal aliens crossing the southern U.S. border.
• The bungled withdrawal of U.S. troops from Afghanistan, including the stranding of Americans and Afghan supporters.
• The controversial JEDI cloud-computing contract at the Pentagon that pits Microsoft against Jeff Bezos’ Amazon Cloud Services.

Many Republicans also believe a more thorough investigation into Hunter Biden’s business deals and his father’s knowledge of them is warranted.