Fauci flop: Documentary praising Covid czar gets 1.6 stars out of 10 on IMDB

The corporate media’s “Hottie” is a big-time “Nottie” among viewers who rated the National Geographic documentary “Fauci” on the Internet Movie Database (IMDB).

The documentary, which fawns over Team Biden Covid czar Anthony Fauci, has as of press time Monday a rating of 1.6 stars out 10 on IMDB. 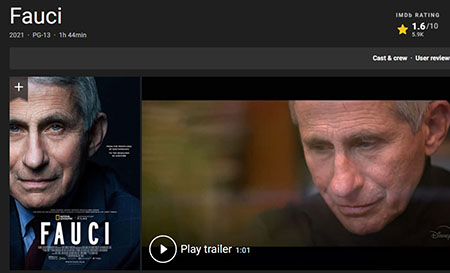 That means “Fauci” has a worse IMDB rating than what is widely regarded as one of the worst films ever made, Paris Hilton’s 2008 rom-com “The Hottie & the Nottie”.

A reviewer who gave the documentary 1 star noted: “The New York Times called Fauci a movie star at the review of this film. Why not? He requested Brad Pitt to play him on Saturday Night Live (SNL) and actor gladly did. Too bad that people demand better from Fauci as the top infectious expert. Expertise is needed rather than glamor. We need a health expert and not a cultural phenomenon.”

Another 1 star rating called the film “a must watch pathological study,” writing: “A must watch, to understand the malignant narcissism, and pathology of the Left. Celebrity sycophants, including George Bush, and Susan “Benghazi” Rice, spend 1h 44 minutes trying to dig Fauci out of his continuing public relations disaster.”

Another labeled it “propaganda,” noting: “Intelligent people are waking up to Fauxi’s lies and incompetence as well as the media’s and government’s incompetence while the sheep fetishize the 21st century’s Dr. Mengele and blindly follow the globalists’ orders. Question everything and follow the money trail.”

Another simply asked “Why?”, writing: “Why did I waste time watching this? It was like a propaganda piece made by someone with a crush on the man. A desperate attempt to portray this man in a positive light, but a documentary about my neighbor Frank would have been more interesting, and he’s a boring guy. I’m sure people will say, ‘The ratings are just low because of trolls,’ and there is some truth to that. I’m sure there are low ratings by people that didn’t even watch. However, by chance, they are correct. It’s that bad.”

Big Media, to no one’s surprise, for the most part salivated over “Fauci” the documentary in the same way it worships him on network and cable news broadcasts (which these days are getting about as many viewers as “The Hottie & the Nottie”).

In reviews posted on Rotten Tomatoes, some seemed to be auditioning for stand-up comedy rather than reviewing the documentary:

“Fauci is a refreshing figure and a standard-bearer for the truth,” the Guardian’s Peter Bradshaw proclaimed.

Danny Leigh of the Financial Times said the film does Fauci “a disservice” because “Fauci is smarter than Fauci.”

While “Fauci” floundered in the IMDB viewer ratings it is still not known if the documentary, which was released in theaters on Sept. 10, was a flop at the box office.

Whether the ode to their “Hottie” surpassed the $27,696 U.S./Canada box office of Hilton’s “The Hottie & the Nottie”, the corporate media are not telling.

“Did Fauci flop? We may never know the answer because the distributor has taken the unusual step of hiding the movie’s box-offices grosses from the public,” Breitbart’s David Ng noted on Oct. 6.

Fauci flop: Documentary praising Covid czar gets 1.6 stars out of 10 on IMDB added by Editor Two on October 11, 2021
View all posts by Editor Two →