Whether they want to or not, families are being thrust into the golden age of transexuals, pansexuals, omnisexuals, non-binaries, and drag queens.

U.S. cities are putting on extravagant events during Pride Month and labeling them as “family friendly,” championed as all-American by Fox News and Marriott International. 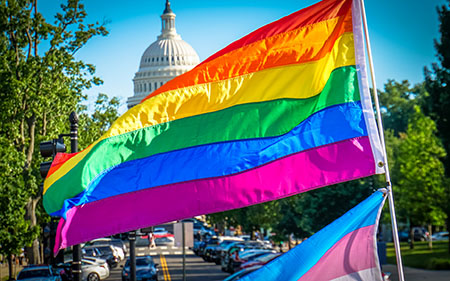 Deep in The Swamp that is Washington, D.C., the Capital Pride Parade “has become too common these days, the event that billed itself as ‘family friendly’ was filled with nudity, fetishism and depravity that children were encouraged to watch,” Kevin Haggerty wrote for BizPac Review on June 12.

“Marching through the Logan Circle and Dupont Circle neighborhoods of D.C., the Marriott International sponsored event had anticipated as many as 500,000 attendees. Including marchers and floats from an array of organizations, the Capital Pride Alliance run event stated their purpose as serving ‘to celebrate, educate, support, and inspire our multi-faceted communities,’ and, evidently, this was best accomplished by twerking half-naked in front of kids,” Haggerty wrote.

“One video captured what was described as ‘a man with breasts’ marching ahead of young children wearing little more than a bikini bottom walking straight up to a police officer, bending over, and shaking his rear at the cop.”

Content that was promoted as appropriate for young children included groups engaged in “Puppy Play” where participants wear canine masks and bondage gear and behave as though they are a dog.

As one observer noted: “The demise of our society continues as men in ‘puppy play’ fetish proudly display their sickness…”

Quite a bit of underage twerking during school performances as well. pic.twitter.com/ZbeHomwdxF

Even Fox News is drinking the woke Kool-Aid.

In the final minutes of America’s Newsroom the morning of June 10, Fox News featured a report, which was introduced with a red, white and blue “America Together LGBTQ+ Pride Month” graphic, about a Southern California family of activists celebrating one of their daughters who believes she is a boy.

“The piece is chock-full of tired and predictable ideological talking points straight from the ‘trans’ politics playbook,” Focus on the Family’s The Daily Citizen reported.

• “The Whittington’s are a typical family … and the only difference in Rylan’s eyes is what this family can mean to the tens of thousands of kids under 18 who identify as transgender.”

• “Before Rylan could speak he managed to tell his parents that he is a boy.”

• “…hopes their experience can help others…”

• “It was like painful. It was painful for him to have to wear feminine clothing…”

• “We were confused like most people… We thought gender and sexuality were the same thing. Those two things are different and children actually do recognize their gender identity very young.”

• “Allowing him to live authentically and true to himself and be who he feels like he is. When you get to know Rylan he see how proud and confident he is of himself.”

“Each of these are chapter-and-verse buzz phrases of gender ideology, based on falsehoods about what it means to be human. They are anti-science and contrary to biology itself. They are deception,” The Daily Citizen noted. “And like clockwork, the (Fox) reporter offers the false talking point that kids who are not affirmed in their confusion will likely kill themselves. This is the worst kind of ideological manipulation, and of course, it is false. But Fox parrots it dutifully in this story.”

The Fox reporter, Bryan Llenas, who according to his Wikipedia page, “has confirmed he is gay and has talked openly about working for a conservative company as a gay minority…” explained they also listened to the mother’s “conservative faith” in their family journey. Mrs. Whittington explains, “For me it is a deep spiritual belief that you believe in God and he, you know, created us the way he wanted us and he created Ryland just the way he is.”

The Daily Citizen noted: “This is an extremely deceptive lie about the goodness of God. God does not play tricks with our bodies. He does not tell us lies through the bodies He gives us. They are gifts that are inherently good as male or female. But trans ideology tells us he does deceive us and that is exactly what this mother is saying.”

By now it is evident that the only reporting on these events that does not stick to a crafted narrative comes from independent media.

Pride Month is not just a spectacle being presented in Democrat-run metropolitan areas.

A zoo Montana is facing backlash after scheduling a “Drag Queen Story Hour” for Pride Month.

ZooMontana in Billings, has planned the event for June 22.

“Why are we putting such a contentious issue right in the heart of that area?” the founder of the Montana Family Rights Alliance, Jenna McKinney, said Thursday in a video call. “This is not appropriate. We really don’t appreciate this in our community and especially at this venue.”

ZooMontana Director Jeff Ewelt has no plans to cancel the event.

“We have heard from many of you in regard to the 406 Pride Drag Queen Story Hour being held at the Zoo later this month. Let me be clear – ZooMontana prides itself in being inclusive of all living beings. 406 Pride is a respected and valued community asset, one we are proud to support and host at ZooMontana,” the director wrote in a Facebook post on Thursday.

“While personal threats and threats of no longer supporting the Zoo are concerning, we will not let unwarranted fear and hate deter our decision to move forward with this harmless and fun reading event that is held throughout the country. At the end of the day, if your personal agenda does not fit this event, we simply ask that you do not come to the Zoo that day. It would be a shame to never allow your children back to the Zoo because of one simple event. Happy Pride month,” the post added.

Over fifty children are in attendance. pic.twitter.com/Nk3fc4q2g4

A child in the front row reacts to a drag queen touching his “breasts” and dancing right in front of him. pic.twitter.com/UoqqG6Pk9Q

Google, H•E•B, and Tito’s are a few of the companies involved. pic.twitter.com/IHFtLuyL4x

Even those who think about opposing the trans narrative find themselves targeted by the leftist mob.

“Critics cried foul this Saturday after a group of right-wing men allegedly linked to white nationalism were arrested in the Idaho community of Coeur d’Alene not for actually rioting at a gay pride event but rather for wanting to riot at said event,” Vivek Saxena wrote for BizPac review on June 12. “Considering that cops nationwide frequently allow left-wing extremists to ‘get away with’ actual rioting, it seemed like the height of bull for the police to suddenly decide to arrest a group of right-wing men on suspicion of wanting to riot, critics said.”

BREAKING: Authorities have stopped this Uhaul and detained approximately 20 people. They all have the same type of clothing on. Truck was stopped about 1/8th mile from the pride event. We’re working to get more info from police. @KREM2 pic.twitter.com/bez1msBz45

The group of men has since been identified as Patriot Front, an alleged white nationalist group.

“Yet strangely enough, the group’s manifesto, posted online, doesn’t contain a single instance of the word white or Caucasian,” Saxena noted. “Instead it speaks about wanting ‘a return to the traditions and virtues of our forefathers.’ Their ‘forefathers’ are described as ‘the varied nations and cultures of Europe,’ a continent brimming with non-white countries.”