NBC News spent weeks chronicling the battle against coronavirus of one of its contributors, Dr. Joseph Fair. 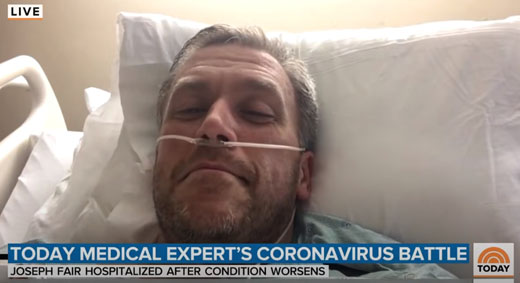 The virologist believed he had COVID-19 and appeared on air numerous times in May and June to discuss his battle with the virus.

“My undiagnosed/suspected COVID illness from nearly 2 months ago remains an undiagnosed mystery as a recent antibody test was negative,” Fair tweeted on July 7. “I had myriad COVID symptoms, was hospitalized in a COVID ward & treated for COVID-related co-morbidities, despite testing negative by nasal swab.”

During a May 14 interview on NBC’s “Today” show, Fair suggested he may have gotten the virus through his eye during a flight. He conducted the interview while in a New Orleans hospital, the Washington Free Beacon reported.

Fair said during the interview: “I am a very healthy person. If it can take me down, it can take anybody down.”

NBC News originally told viewers about the negative tests, but abandoned that part of the narrative as the story continued, according to Steve Krakauer’s “Fourth Watch” newsletter. During a June 14 interview with Chuck Todd on “Meet the Press,” no one noted that Fair had already tested negative at least five times, according to Krakauer.

“In the end, NBC’s viewers were left with two very alarming – and false – impressions,” Krakauer wrote. “First, that an expert virologist can take every precaution but can still catch COVID-19 through his eyes. False. Second, that tests can be so untrustworthy that you can have multiple negative tests and still have coronavirus.”

NBC News has not yet updated its May 14 article claiming the virologist got “coronavirus despite being in good health and taking precautions.”

Krakauer added: “This pandemic is scary enough without this false storyline introduced into the news picture.”