While some aging world leaders sag before our eyes, Russian President Vladimir Putin could be a poster boy for wrinkle-free creams.

How does he it? 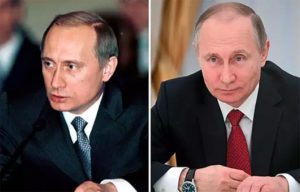 “He looks better than he did in 2002 so it’s obviously worked for him,” said Toronto cosmetic surgeon Stephen Mulholland.

Most noticeably, he said, is the steady plumpening of the Russian leader’s cheeks.

“I would speculate that he’s had filler and Botox done, and this is evident by smoothness around his forehead and the crow’s feet around his eyes and volume along the cheeks,” said Philip Solomon, a Toronto facial cosmetic surgeon.

The hollow cheeks and bags under the eyes that were once a hallmark of Putin’s famous icy stares have vanished, Solomon said.

“That’s the nature of the modern man: even Putin can be a metrosexual and not have to admit it,” said Mulholland.

He told the National Post that artificial fillers or fat grafts would fill in sagging areas below the eyes and on the cheeks. Botox injections would smooth out wrinkles, and treatments with a fractional Co2 laser would tighten what cosmetic professionals refer to as “crepe-y skin” around his eyes.

The procedures likely started out small with a few injections, although Mulholland said the Russian president appears to have undergone a major set of treatments between 2012 and 2014 — a period just before the Sochi Olympics, and just as Putin was divorcing his wife, Lyudmila.

“Moscow’s a big market for this now, so he probably would have had it locally,” said Mulholland.

None of Putin’s procedure would require him to go “under the knife,” the cosmetic surgeons said. The procedures are all administered with injections or surface abrasion, which means the recovery time would be as little as a week.

The procedures also require steady maintenance: Putin would need to be returning for additional injections about twice a year.

Solomon said that if Putin is indeed getting work done, he has been careful to do it the right way: “Subtle changes that are hard for the average person to predict.”