The ruling elites are going to great lengths to shield the NIH, NIAID, Anthony Fauci and Big Pharma from scrutiny.

The Facebook censors have restricted WorldTribune.com’s advertising access after the platform’s so-called “fact-checkers” determined that a story detailing a reporter’s investigation into experiments that were done on AIDS orphans in New York City was “inaccurate.” 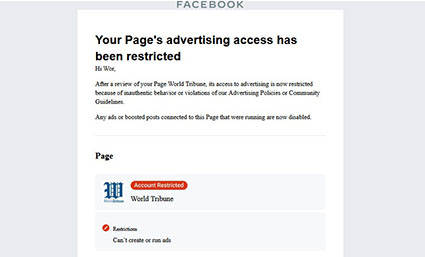 The WorldTribune article extensively cited the reporting of Liam Scheff, who said his investigation found that the National Institutes of Health (NIH), which approved the experiments, and Columbia Presbyterian Hospital, which carried them out, acted unethically.

The article also cited an Associated Press report from June 2005 which said: “The government has concluded at least some AIDS drug experiments involving foster children violated federal rules designed to ensure vulnerable youths were protected from the risks of medical research.”

Nowhere in the WorldTribune.com article does it say that any deaths were caused by trial medication.

The article states: “Scheff reported several deaths in children at the ICC during the drug trials, adding that ‘although the mainstream denied that any deaths were due to drug toxicity, they admit that over 200 children died.’ ”

The article also cited a VERA Institute report which said that 25 children died during the drug studies, that an additional 55 children died following the studies (in foster care), and, according to Tim Ross, Director of the Child Welfare program at VERA (as of 2009), 29 percent of the remaining 417 children who were used in drug studies had died (out of a total 532 children that are admitted to have been used).

The report notes that the children died “during” or “after” the tests. Nowhere, as Health Feedback contends, does it state that the deaths were caused by the trial medication.

Health Feedback confirms that NIH, via the National Institute of Allergy and Infectious Diseases (NIAID) and the Eunice Kennedy Shriver National Institute of Child Health and Human Development (NICHD), funded a number of the trials that occurred in New York City in which foster children with HIV were enrolled. The “fact-checkers,” however, say “it’s unknown if Fauci had any personal decision in funding these trials.”

The WorldTribune.com article notes that Fauci was the NIH AIDS Coordinator before being appointed as the first Director of the Office of AIDS Research when the office was established in 1988. He served in that capacity until 1994. The experiments on AIDS orphans began in 1992.

Fauci became director of the NIAID in 1984 and still holds that position.

Are we to believe that the director of NIAID and the Office of AIDS Research didn’t know anything about his own agency’s funding of experiments on “foster children with HIV”?

Facebook and its “fact-checkers” are invested in a narrative. It is a narrative that shields government agencies, prominent government employees, and Big Pharma from being scrutinized. Accuracy and honesty are thrown out the window when it comes to their so-called “fact-checks.”