Facebook: Depiction of Native Americans in the Declaration of Independence is hate speech

Facebook initially determined that a portion of the Declaration of Independence posted by a Texas community newspaper in the run-up to the July 4 holiday amounted to hate speech. 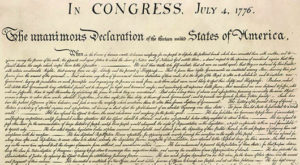 In the days prior to July 4, the Liberty County Vindicator had posted small portions of the founding document on its Facebook page.

“He has excited domestic insurrections amongst us, and has endeavoured to bring on the inhabitants of our frontiers, the merciless Indian Savages, whose known rule of warfare, is an undistinguished destruction of all ages, sexes and conditions.”

The Vindicator received an automated notice saying the post “goes against our standards on hate speech.”

Vindicator managing editor Casey Stinnett said the newspaper was warned it could lose its account if there were more violations of Facebook’s “standards.”

Stinnett wrote: “Perhaps had Thomas Jefferson written it as ‘Native Americans at a challenging stage of cultural development’ that would have been better. Unfortunately, Jefferson, like most British colonists of his day, did not hold an entirely friendly view of Native Americans.”

“It looks like we made a mistake and removed something you posted on Facebook that didn’t go against our Community Standards. We want to apologize and let you know that we’ve restored your content and removed any blocks on your account related to this incorrect action,” Facebook wrote back, the Vindicator reported.

Reason magazine’s Christian Britschgi noted that Facebook’s actions “demonstrate a problem with automated enforcement of hate speech policies, which is that a robot trained to spot politically incorrect language isn’t smart enough to detect when that language is part of a historically significant document.”