Without warning or explanation, a Facebook group named “Joe Biden IS NOT MY PRESIDENT!” has been deleted from the social media platform, a report said. 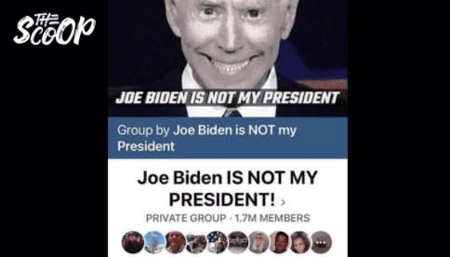 The group has more than 1.7 million members and was created on Dec. 15, The Scoop reported on Jan. 1.

The anti-Biden group had set a Facebook record for shortest amount of time to reach 1 million members.

The group’s administrators said in a Parler post that “we had no violations.”

While the anti-Biden group was removed after just two weeks, the “Not My President” anti-Trump Facebook group is still alive and kicking on the platform some 4 years after it was created.

The anti-Trump Facebook group posted their first video before President Donald Trump’s inauguration in January 2017. That page has 750,000 members.

Meanwhile, Facebook was accused of interfering in the Georgia Senate runoff elections after the platform shut down a fundraising page for Republican Sens. Kelly Loeffler and David Perdue just days before voters head to the polls on Jan. 5, The Epoch Times reported on Jan. 2.

The National Republican Senatorial Committee (NRSC), which runs the Georgia Battleground Fund, said that Facebook alerted them that the page for the fund was disabled “for policy violation.”

The page allegedly violated a policy against unacceptable business practices.

“We don’t allow ads that promote products, services, schemes, or offers using deceptive or misleading practices, including those meant to mislead or scam people out of money or personal information,” the alert said.

“Big Tech is at it again,” the NRSC said in a statement. “This is unacceptable with only four days to Election Day.”

A Facebook spokesperson claimed in a statement to the media that shutting down the page was a mistake.

“An automated error caused this ad account to be disabled,” the spokesperson said. “The account has since been restored.”