The WikiLeaks website was blocked by the Turkish government on July 20 after it leaked a slew of classified emails linked to President Recep Tayyip Erdogan’s post-coup purges. 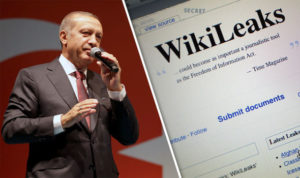 The move by the Turkish government came a day after WikiLeaks released 300,000 emails from Erdogan’s Islamist AKP party.

The country’s Telecommunications Communications Board announced an “administrative measure” against WikiLeaks which effectively blocked all access to the site within Turkey.

The 300,000 emails, which span from 2010 to this month, include correspondence in which Gazan terrorists are advised on how best to conceal and fire rockets at Israeli civilian targets during 2014’s Gaza war.

In a message posted together with the first batch of the “AKP Email Archives,” WikiLeaks explained it had only recently obtained the material, and was releasing it early “in response to the government’s post-coup purges.”