A noted forensic pathologist hired by the brother of Jeffrey Epstein, the wealthy and well-connected pedophile who is alleged to have killed himself in a New York City jail cell, said evidence does not support the city medical examiner’s finding of suicide as the cause of Epstein’s death.

Mark Epstein hired Dr. Michael Baden to oversee the autopsy on Aug. 11 — the day after Jeffrey Epstein was found dead at the Metropolitan Correctional Center in downtown Manhattan. 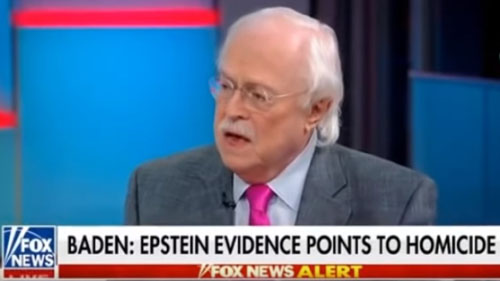 “I think that the evidence points toward homicide rather than suicide,” Baden, a Fox News contributor, said on Fox & Friends on Oct. 30.

“Because there are multiple — three fractures in the hyoid bone, in the thyroid cartilage that are very unusual for suicide and more indicative of strangulation, homicidal strangulation,’ Baden said.

New York City Medical Examiner Barbara Sampson ruled Epstein’s cause of death to be a suicide by hanging.

Sampson, in a statement Wednesday, said she is confident in her conclusion that Epstein hanged himself.

Meanwhile, federal prosecutors probing Epstein’s sex-trafficking ring have been asking his victims if they could serve as witnesses in a criminal case, according to news reports.

The U.S. Attorney’s Office for the Southern District of New York sent representatives to Florida for an Oct. 15 meeting with several victims and their attorneys. Another meeting was arranged in New York on Oct. 23, law enforcement source told The Daily Beast.

“Two people familiar with the investigation said that prosecutors have heard from ‘dozens’ of witnesses or victims since Epstein’s arrest in July” according to the report.

Baden said the ligature, the item used to tie something tightly, allegedly on Epstein’s neck was made from a sheet and could have DNA on it to provide more context into the death. He then questioned why the results of the DNA test have not been released yet.

He said, “There’s evidence here of homicide that should be investigated, to see if it is or isn’t homicide. It’s 80 days and the brother feels he’s getting the run-around.”

Baden told the Miami Herald that it is rare for any bones to be broken in a hanging, let alone for multiple bones to be fractured.

“Those fractures are extremely unusual in suicidal hangings and could occur much more commonly in homicidal strangulation,” said Baden, who added that there were hemorrhages in Epstein’s eyes that are also more common in strangulation than in hangings.

Baden told to the Herald that the pathologist who actually conducted the autopsy, Dr. Kristin Roman, also had trouble determining that Epstein hanged himself, and determined that the manner of death was “pending.’’

“The autopsy did not support suicide,’’ Baden said. “That’s what she put down. Then Dr. Sampson changed it a week later, manner of death to suicide. The brother has been trying to find out why that changed. … What was the evidence?”

Baden, 85, has participated in some of the country’s most infamous death investigations, including the congressional inquiry into the assassination of President John F. Kennedy.

“For nearly five decades, Baden has also been a member of a New York state commission that reviews deaths in the state’s prisons, and knows how crime scenes within the isolation of prisons can be tainted and even staged,” the Miami Herald noted.

“There’s always concern that if the only reporting you are getting is from those involved in the care of that inmate and that it may be biased,’’ Baden said.

In Epstein’s case, Baden said he saw a photograph of the cell after Epstein’s body was removed. It showed a ligature fashioned from an orange bed sheet on the floor of the cell. Baden said he was told — but shown no written report — that a corrections officer found Epstein’s body, on his knees with the orange ligature around his neck, tied to the top bunk in his cell.

Baden pointed out that authorities have only the word of the people in the jail as to what happened, and his impression is that the officers were not forthcoming.

“He was stone cold dead when they found him,’’ Baden told the Herald. “He had been dead for three hours. Rigor mortis set in, and it was apparent he was dead, yet they called EMS and didn’t photograph how the body was found.’’

Baden said Sampson’s conclusion sends a message that there is no need to look further into how Epstein died.