EPA’s Pruitt thanks teacher from elite school after she interrupted his meal, urged him to resign

Environmental Protection Agency (EPA) Administrator Scott Pruitt on July 2 became the fourth Trump administration official to be harassed in public at a restaurant. 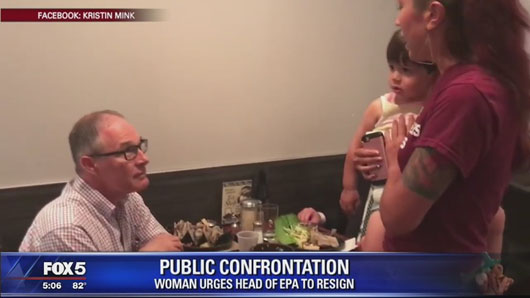 According to a Facebook post, Kristin Mink, a teacher at the elite private school Sidwell Friends in Washington, D.C. where President Barack Obama sent his two daughters, confronted Pruitt as he dined at the Teaism restaurant, four blocks from the EPA’s headquarters.

“I just wanted to urge you to resign, because of what you’re doing to the environment in our country,” Mink said, holding her two-year-old son and a notepad, as her husband recorded the encounter.

Mink later posted the video on Facebook and Twitter explaining that Pruitt had been sitting three tables away from her as she ate lunch with her family.

“I had to say something,” she said.

Mink said Pruitt and his lunch partner left after the confrontation.

Pruitt’s spokesman said he didn’t leave because of Mink, and he also thanked her after she was done.

“Administrator Pruitt always welcomes input from Americans, whether they agree or disagree with the decisions being made at EPA. This is evident by him listening to her comments and going on to thank her, which is not shown in the video,” EPA spokesman Lincoln Ferguson told the Post.

“His leaving had nothing to do with the confrontation, he had simply finished his meal and needed to get back to the EPA for a briefing.”

Pruitt is the fourth member of the Trump administration to be harassed at a restaurant in recent weeks.