During the month of January, the average high temperature in Alaska’s interior is minus two degrees. The average low is minus 17 and temperatures can drop as low as minus 60.

So, Alaskans rely on wood-burning stoves to survive the winter as such is the only option for many. 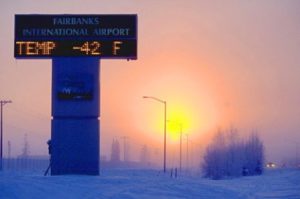 The EPA has a problem with that.

According to the EPA, smoke from wood-burning stoves increases small-particle pollution, which settles in low-lying areas and can be breathed in.

The agency may soon declare the Alaskan cities of Fairbanks and North Pole, which have a combined population of about 100,000, in “serious” noncompliance of the Clean Air Act, according to a report by The New York Times.

Because noncompliance with the EPA could result in huge financial penalties, state and local authorities are looking for ways to cut down on pollution from wood-burning stoves, including the possibility of fining residents who burn wood.

“The problem is, there’s no replacement for wood-burning stoves in Alaska’s interior,” John Daniel Davidson, who grew up in Alaska, wrote for The Federalist on Dec. 30. “Heating oil is too expensive for a lot of people, and natural gas isn’t available.

“For people of modest means, and especially for the poor, that means you burn wood in a stove — and you keep that fire lit around the clock. If you don’t keep the fire lit, you die.”

An EPA official told the Times that the agency “was definitely not trying to take away anyone’s wood stove, or make life more expensive.” But he also said the EPA’s job is to enforce air quality standards set by the Clean Air Act.

“This of course is a ridiculous situation,” Davidson wrote. “The EPA has no business telling Alaskans they shouldn’t burn wood to keep warm in the depths of winter.

“For one thing, concern over air pollution from wood smoke is misplaced. The high levels of particulate matter in places like Fairbanks in January are not the same thing as smog in Los Angeles … we aren’t talking about pollution-laced fog descending on an entire city; we’re talking about burning wood to stay warm.”

Davidson concluded: “Of the earnest bureaucrats at the EPA fretting over the smoke from Alaskans’ wood stoves in the dead of winter, we might say something similar: they understand facts but not the significance of them. Burning wood when it’s -20 degrees outside will indeed cause the smoke to descend, and breathing such air is admittedly not very healthy. What the EPA doesn’t accept, or even grasp, is man’s place in the universe: in the face of Alaska’s deadly cold interior, there’s only so much we can do. So we build a fire.”