Egypt’s military hit by major ISIL attack in the Sinai 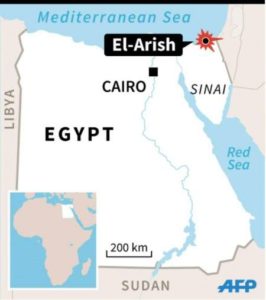 “A number of caliphate soldiers attacked a checkpoint belonging to the apostate Egyptian army in the Sabeel village, southwest of Arish city, and the following clashes using light and medium weapons were able to kill 15 of the checkpoint’s elements,” the terror group’s propaganda arm said in a statement.

Egypt’s military put the death toll at 12 and said another 12 soldiers were injured and one was missing. The military said three attackers were killed.

The Egyptian army has been battling an Islamist insurgency in northern Sinai since 2013. The government says hundreds of police and soldiers have died in the attacks, which have also hit Cairo and the Nile Delta. Most of the attacks have been claimed by Sinai Province, the Egyptian ISIL affiliate.

On Nov 4, gunmen killed a top Egyptian army officer outside his home in northern Sinai.

Egyptian prosecutors announced last week they would try 292 jihadist suspects over plots to assassinate President Abdul Fatah Sisi and the Saudi crown prince and for carrying out attacks in the Sinai Peninsula.