An Egyptian court on June 21 nullified a maritime border agreement that would have seen Egypt transfer control of two Red Sea islands to Saudi Arabia. 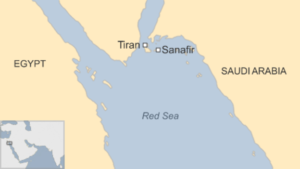 The government of President Abdul Fatah Sisi, who insisted that Tiran and Sanafir had always belonged to Saudi Arabia, said Egypt will appeal the ruling to a higher court.

Egypt’s State Council, an administrative court, issued the verdict on June 21 annulling April’s maritime borders agreement between Cairo and Riyadh. The verdict stated that the two islands would “remain under Egyptian sovereignty.”

If the June 21 ruling is approved by the country’s High Administrative Court it will become legally binding.

Tiran and Sanafir are uninhabited and located at the mouth of the Gulf of Aqaba, a strategic part of the Red Sea bordered by Israel, Jordan, Egypt and Saudi Arabia. Egyptian troops have been stationed there since 1950 at Riyadh’s request.

Israel captured the islands in 1956 and 1982, subsequently returning them to Egypt both times.