Three leaders of the Islamic State (ISIS) affiliate in Egypt were among 19 jihadists killed in airstrikes in north Sinai, Egypt’s military said on April 20. 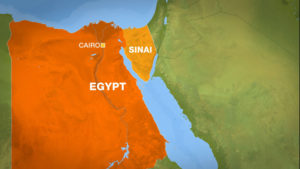 The military said the airstrikes were directed at jihadists of Ansar Bayt al-Maqdis, which pledged allegiance to ISIS in 2014 and adopted the name Sinai Province. Officials have blamed the group for killing hundreds of Egyptian soldiers and police since then.

Cairo did not name the ISIS leaders it had killed in the airstrikes, but described one as among the group’s most prominent members, and another as the head of its sharia law committee. The third was an official in charge of interrogations, the military said.

Earlier this week, ISIS claimed responsibility for an attack on security forces near St. Catherine’s Monastery in the south Sinai, the latest in a series of attacks targeting Egypt’s Christian minority in recent months.

Egypt is tightening security ahead of a visit by Pope Francis next week as a result of suicide bombings this month on two Christian churches, also claimed by ISIS, the Jerusalem Post reported.