The executive chairman of News Corp Australasia defended a Melbourne Herald Sun cartoonist after critics labeled his depiction of Serena Williams’s outburst during the U.S. Open finals as “racist” and “sexist.” 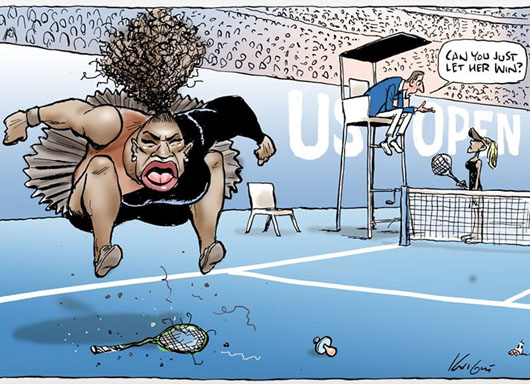 “Criticism of Mark Knight’s Serena Williams cartoon shows the world has gone too PC & misunderstands the role of news media cartoons and satire,” said Michael Miller. “Poor behavior in any sport needs to be called out.”

The newspaper’s editor, Damon Johnston, also defended Knight: “A champion tennis player had a mega-tantrum on the world stage, and Mark’s cartoon depicted that. It had nothing to do with gender or race.”

During her loss to Naomi Osaka in the Sept. 8 final, Williams smashed her racquet and berated chair umpire Carlos Ramos, calling him a “thief” and a “liar.”

The cartoon shows Williams spitting out a pacifier and stomping on her tennis racquet as the chair umpire tells Osaka in the background: ‘Can you just let her win.’ ”

Author JK Rowling said: “Well done on reducing one of the greatest sportswomen alive to racist and sexist tropes and turning a second great sportswoman into a faceless prop.”

The New York Times quoted Shareena Clanton, an Aboriginal Australian actress and activist, as saying: “This is what Australia does. This is what it has always done to people of color and, in particular, black women who reach the top.”

“This whole cartoon is vile,” Clanton said, adding Osaka, who is Haitian-Japanese, had been drawn as a white woman. “The fact that it was printed and passed the editor’s room speaks even more volumes about the landscape of our media here in Australia.”

Knight responded to the critics by saying: “I drew this cartoon Sunday night after seeing the U.S. Open final, and seeing the world’s best tennis player have a tantrum and thought that was interesting. The cartoon about Serena is about her poor behavior on the day, not about race. The world has just gone crazy.”