Special Counsel John Durham states in a new court filing in his investigation into the origins of Russiagate that he is in possession of “hundreds of emails in which Fusion GPS employees shared raw, unverified, and uncorroborated information – including their own draft research and work product – with reporters.”

In the filing, Durham casts doubt on the declaration of Democrat Party lawyer and top Clinton associate Marc Elias that Fusion GPS was retained to provide “legal advice.”

Durham states: ”If rendering such advice was truly the intended purpose of Fusion GPS’s retention, one would also expect the investigative firm to seek permission and/or guidance from [Hillary for America] or its counsel before sharing such derogatory materials with the media or otherwise placing them into the public domain.”

• Emails with Slate’s Franklin Foer from May 14, 2016 in which Fusion GPS conveys information on a Trump advisor and Alfa Bank.

• July 26, 2016 e-mails from Fusion GPS to the Wall Street Journal communicating allegations from Christopher Steele stating “a Trump advisor meeting with a former KGB official close to Putin … would be huge news.”

• July 29 and July 31, 2016 emails with a reporter (Washington Post’s Tom Hamburger) concerning Carter Page’s investments and meetings with Russians – of which the reporter said “Its bullshit.”

• An e-mail from a Fusion GPS co-founder to the New York Times – dated October 31, 2016 – pushing the Alfa Bank allegations and stating the U.S. Government is investigating.

An email exchange between Fusion GPS and Foer (then with Slate, and now with The Atlantic) has Fusion GPS alleging that Millian is “clearly KGB.”

A Techno Fog analysis of Durham’s filing notes: “Take a close look at Foer’s interactions with Fusion GPS. This is the press you don’t see: groveling to opposition researchers, begging for their assistance with ‘omissions and errors,’ and pleading that his draft not be distributed to the competition. In other words, entirely consistent with the journalistic standards of Slate.” 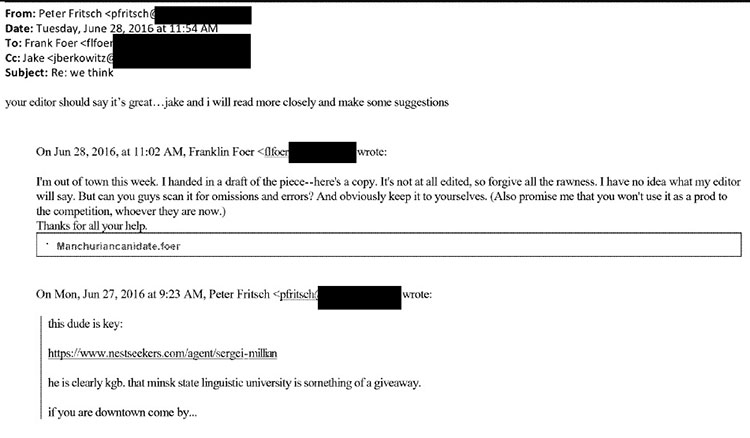 In another email, Fusion GPS tells a Wall Street Journal reporter to call Adam Schiff or Diane Feinstein about Trump associate Carter Page. Analysts say this is evidence that Fusion GPS, by July 26, 2016, had briefed Schiff and Feinstein (and their staffers – including Daniel Jones, a person of interest in the Durham investigation) about their Trump-Russia “research.”

Democrat-funded Fusion GPS, which was behind the discredited Trump-Russia dossier, and Hillary for America have attempted to to keep secret communications involving Fusion GPS by use of the attorney-client and work product privilege, Durham said in the Aug. 25 filing in the U.S. District Court for the District of Columbia.

Durham makes clear in his latest filing that no lawyers were copied in these e-mails, indicating they have nothing to do with legal advice. Analysts say that, even if there were some type of privilege or work product involved, it was waived when Fusion GPS distributed the information to the press.

Durham states the “purported privilege holders who have intervened do so in a case in which the defendant has denied representing any client when he brought the Russian Bank-1 allegations to the FBI.”

Techno Fog notes: “The privilege controversy thus entraps (Michael) Sussmann to a certain extent, seemingly precluding his denial that he was working on behalf of a client.”