Justice Department Inspector General Michael Horowitz released his 434-page report Monday on the origins of the Trump-Russia collusion hoax. The report is still being reviewed by congressional representatives.

In a rare public statement, Connecticut U.S. Attorney John Durham, who was appointed by Attorney General William Barr to investigate the origin of the FBI’s investigation, voiced disagreements with the report’s conclusions 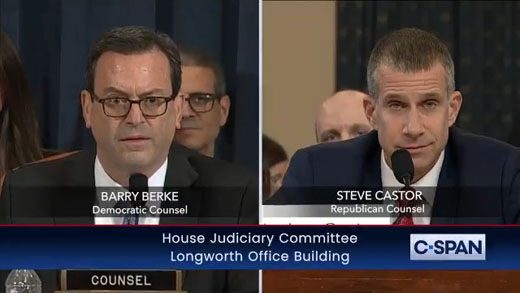 “I have the utmost respect for the mission of the Office of Inspector General and the comprehensive work that went into the report prepared by Mr. Horowitz and his staff,” stated Durham. “However, our investigation is not limited to developing information from within component parts of the Justice Department. Our investigation has included developing information from other persons and entities, both in the U.S. and outside of the U.S. Based on the evidence collected to date, and while our investigation is ongoing, last month we advised the Inspector General that we do not agree with some of the report’s conclusions as to predication and how the FBI case was opened.”

Last month, Durham changed his investigation into the origin of the FBI probe into Trump from an administrative review to a criminal probe.

Meanwhile, counsels for both Democrats and Republicans were not sworn in by House Judiciary Committee Chairman Rep. Jerrold Nadler at Monday’s impeachment hearing, allowing them to make claims without fear of perjuring themselves.

“Berke in particular made several factual assertions — many of which were dubious at best, and outright false at worst,” Joel B. Pollak, senior editor-at-large at Breitbart News, noted.

Berke claimed that State Department staffer David Holmes had “heard it from the president himself” when he testified that President Donald Trump was interested in Ukraine conducting investigations.

“In fact, Holmes had not heard anything directly from the president,” Pollak pointed out. “Rather, he claimed to have overheard part of a conversation on a mobile phone between U.S. Ambassador to the European Union Gordon Sondland and the president. Sondland was at an outdoor table at a restaurant at the time, and Holmes had been drinking wine with him and two other staffers. Despite a habit of taking notes, and despite the fact that he later emailed the U.S. embassy in Sweden about a part of the conversation dealing with then-jailed U.S. rapper A$AP Rocky, Holmes never wrote down what he later claimed he heard the president telling Sondland. Berke suggested, however, that Holmes heard the president first-hand.”

In addition, Pollak noted that Berke “played a deceptively edited clip of President Trump speaking at a Turning Point USA conference, claiming that the president believed he could do ‘whatever I want.’ In fact, as the full context of the president’s statement — a fragment of a sentence — made clear, Trump was talking specifically about his power to fire Special Counsel Robert Mueller, which he did not ultimately do.”

When Republicans raised a point of order, objecting to Berke impugning the president’s motives, which is forbidden under House rules, Nadler ruled that the point of order was invalid because, having not been sworn in, Berke was not a witness.

Later, Nadler described Berke and Castor as witnesses, prompting Republican objections that he had contradicted himself.

Meanwhile, House Intelligence Committee Chairman Rep. Adam Schiff failed to show up at the presentation of his own committee’s impeachment report at the House Judiciary Committee hearing.

Schiff’s 300-page report, released last Tuesday afternoon, is the only “evidence” to be presented in the impeachment inquiry.

Speaker of the House Nancy Pelosi has instructed Nadler to begin drafting articles of impeachment on the basis of Schiff’s report.