The United States plans to form a military coalition “that would ensure freedom of navigation both in the Straits of Hormuz and Bab al-Mandab,” the chairman of the U.S. Joint Chiefs of Staff said on July 9.

The U.S. is “engaging now with a number of countries” who could be part of the coalition which the Pentagon would provide command and surveillance assets for, Marine Gen. Joseph Dunford said. 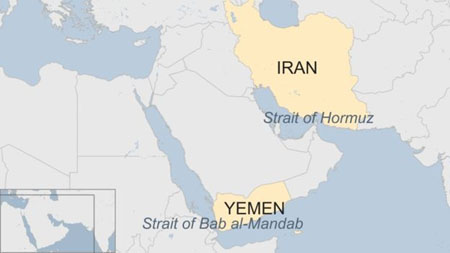 “And so I think probably over the next couple of weeks we’ll identify which nations have the political will to support that initiative and then we’ll work directly with the militaries to identify the specific capabilities that’ll support that,” Dunford said.

The U.S. in the past has floated plans to safeguard the water lanes, but Dunford’s remarks that the coalition would also seek to bolster security in the Bab al-Mandab off Yemen appeared to be a new element, according to a July 10 report by Radio Free Europe/Radio Liberty.

The narrow Bab al-Mandab connects the Red Sea with the Gulf of Aden and the Arabian Sea.

Iran has long threatened that if is unable to export its oil, it would shut down the Strait of Hormuz. Almost a fifth of the world’s oil is shipped through the strait.

U.S. President Donald Trump has vowed to reduce Iran’s oil exports to zero as a means of pressuring Teheran to give up its nuclear program.

Washington said Iran and its terror proxies were behind recent attacks on shipping vessels in the region. Iran denies it was involved in the attacks.

Dunford said that allied nations joining the coalition would patrol waters near the U.S. command ships and escort commercial vessels with their nation’s flags through the heavily traveled waters between the Arabian Peninsula and the Horn of Africa.

Dunford did not discuss how many partners he expected to attract to the coalition, but said its efforts could be adjusted depending on the number of participants.

“This will be scalable. So, with a small number of contributors we can have a small mission and we’ll expand that as the number of nations that are willing to participate identify themselves,” he said.