Dreaming: What if Kim Jong-Un wanted to prove he is human? Here’s how

Small gestures would be so helpful in bringing about reconciliation with North Korea.

Take, for instance, the cases of the three U.S. citizens still held in the North. They are all Korean-Americans, two of them former teachers at the Pyongyang University of Science and Technology, the other a businessman who once ran a trading company in the Rason special economic zone on the North’s far northeastern coast.

Actually, freeing these three would be more than a small gesture but would be relatively minor compared to Kim Jong-Un’s decision to pull back from the immediate threat of test-firing medium-range missiles in the direction of Guam, the island territory on which the U.S. has strategic air and naval bases. 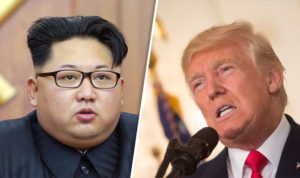 For days people have been wondering if President Trump would really respond with strikes on North Korea that might set off Korean War II.

The danger of Kim ordering more missile tests, much less another underground nuclear test, is by no means over. As U.S. and South Korean forces plunge into two weeks of annual war games, North Korea is sure to pour out a flood of rhetoric and may test more missiles. Okay, they may not land near Guam, but he may think he needs to fire them somewhere, anywhere, just to save face.

But what about showing a certain goodwill, a desire for reconciliation, by letting these three prisoners go?

North Korea is telling U.S. diplomats in secret talks in New York that now is not the time to free them, but when could it be better than now, since Kim has decided not to fire a missile toward Guam right away? In this atmosphere, freeing the three would be enough to convince a lot of skeptics that he does want peace.

The need to free these three is all the more timely in the aftermath of the recent freeing of the Korean-Canadian pastor who was held for two years and seven months. Sentenced to a life of hard labor for attempting to “overthrow” the regime, he was said to be in ill health before leaving in the hands of Canadian officials and doctors. By the time he got back to Toronto, he was well enough to attend services at the church where he had served as pastor.

No one knows what’s going on in the minds of North Korean strategists, but maybe they were afraid of another case like that of Otto Warmbier, the unfortunate University of Virginia student who had been sentenced to 15 years of hard labor for stealing a propaganda banner from his hotel in Pyongyang hours before he was to leave.

Warmbier, released in a coma in June, died six days after his arrival in Cincinnati ― a tragedy that prompted the State Department to ban travel to North Korea by most U.S. citizens.

The cases of the three U.S. citizens still held in North Korea are interesting. What could the two at the Pyongyang University of Science and Technology have been doing that got them arrested? How safe is anyone who takes a position in North Korea? They should be able to tell a lot about the pressures they were under if and when they are freed.

As for the businessman who was arrested at Rason, he was charged with espionage and given ten years. Had he been set up to receive secret information from a contact he trusted?

The personal tales of the 12 other Americans who have been held in North Korea over the years, and eventually released, are all revealing. Some of them were freed in great publicity stunts. Two former presidents, Bill Clinton and Jimmy Carter, flew there on rescue missions seen by the North Koreans as recognition of the greatness of their regime.

Sadly, after the publicity died down, they did nothing to resolve ongoing issues, notably the North’s missiles and nukes.

So how about building on the theme of reconciliation and dialogue by releasing the three Americans now held in North Korea? Imagine the goodwill Pyongyang could generate by seizing this moment to bid farewell to all three.

Nope, it’s not likely Kim Jong-Un was thinking of that when he put off firing missiles into the waters off Guam. Still, it would be nice if he would go beyond a temporary delay in missile-testing and consider this and other ways to bring about enduring peace.

Donald Kirk has been covering war and peace in the region for decades. He’s at kirkdon4343@gmail.com

Dreaming: What if Kim Jong-Un wanted to prove he is human? Here’s how, Kim Jong-Un, WorldTribune.com