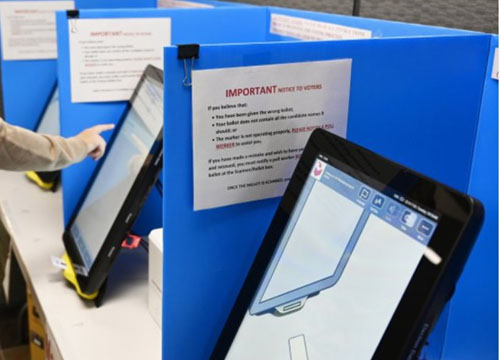 Conservative author Wayne Allen Root tweeted on Wednesday: “BREAKING NEWS: @RudyGiuliani has confirmed whistleblowers from Dominion have come forward. OMG. They stole election. Switched votes from @realDonaldTrump. What did he really get? 81 MM votes? 91 MM? But they stole it. Biggest scandal in world history. Got ‘em!”

Giuliani spoke on Wednesday with Steve Bannon and confirmed that whistleblowers from Dominion have come forward, reported Gateway Pundit.

“In the interview Rudy Giuliani said, [David] Coleman has the community people and he’s got the Dominion people. And they were the ones who were the actual, not poll watchers, the actual observers who were excluded, who were lied to, two of whom stayed behind after all the Republicans had left out and they’re the ones who got the evidence of the 100,000 votes coming in. And they have some photographs also.”

The New York Times has even confirmed as much, writing: “On Wednesday, Rudolph W. Giuliani, the president’s lawyer, said he was in contact with ‘whistle-blowers’ from Dominion.”

RealClearInvestigations noted that a poll watcher in Georgia reported a possible Dominion glitch:

A curious thing happened as Fulton County, Ga., election officials counted mail-in ballots at Atlanta’s State Farm Arena in the days after the election. In the early hours of Nov. 5, a surge of some 20,000 mail-in votes suddenly appeared for Joe Biden, while approximately 1,000 votes for President Trump mysteriously disappeared from his own totals in the critical swing state, where Biden holds a razor-thin lead.

A poll watcher noticed the suspicious shift in votes while monitoring the interim election results on the Georgia secretary of state website.

“I concluded from looking at these results that this was an irregularity, since there was no obvious reason for President Trump’s totals to have decreased while former Vice President Biden’s totals increased dramatically,” Voter GA co-founder Garland Favorito swore in an affidavit he filed this week with the secretary of state’s office.

Favorito suspects a variety of factors, including that votes were “artificially inflated” for Biden while using the same Dominion Voting system used by Antrim County, Mich., which erroneously transferred 6,000 votes from Trump to Biden. Last year, Georgia contracted with Dominion to automate vote tabulations in all 159 of its counties.

“The software appears to have thrown votes from Trump to Biden here too,” he said in a RealClearInvestigations interview. “Or Biden ballots were manufactured.”

The large disparity of gains between the two candidates “was something I had never witnessed before in my years of election monitoring,” said Favorito, a career IT professional who has been a leading advocate for election integrity in the state over the past two decades. He says he is not a Republican or Trump supporter.

At least one whistleblower has already gone public. Mellissa Carone, who said she is a contractor for Dominion, said in an interview with Lou Dobbs on Fox Business that she witnessed ballots being re-scanned and re-counted at least 4 to 5 times before being discarded.

In this case, the “re-scans” are different from simply trying to get the machine to re-read the ballot.

Carone in the interview appears to allege that this was done purposefully to inflate Biden’s vote count in Michigan.

Carone was scheduled to appear on Fox News as well, but Fox canceled, reports say. Instead, she appeared on a podcast (link here.)