A witness at Wednesday’s state Senate hearing in Georgia was able to access, in real time, the Dominion system at a Georgia polling place. 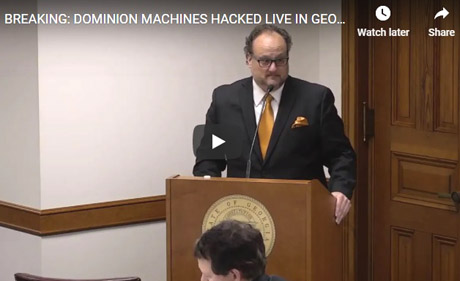 Inventor Jovan Hutton Pulitzer established a two-way communication from a polling pad in a voting center.

“At this very moment at a polling location in the county, not only do we have access through the devices to the poll pad, the system, but WE ARE IN,” Pulitzer said.

Georgia’s Senate Judiciary Subcommittee on Elections and members of the Senate Judiciary Committee held the hearing to study Georgia’s Election Laws and the numerous voting irregularities in the 2020 presidential election.

Pulitzer also revealed differences between ballots printed for Democrat precincts versus Republican precincts, which he said caused GOP votes to get kicked out by the Dominion Voting Systems machines.

Pulitzer confirmed that the system tabulating votes in the two Senate runoffs in Georgia is connected to the Internet.

“That’s going on right there where everyone is voting [in the Georgia runoff],” he said.

Pulitzer said: “I have no regard for the smoking mirrors of how the machines work, the hidden stuff in the code, or how this machine is supposed to be programmed. If the machine worked according to programming none of us would be standing here. We’re here because something broke.

Pulitzer said the people of Georgia trusted state officials to ensure the election was valid and fraud free. The current election results are flawed, he said: “This isn’t the beating of a drum, this is the burning of a city.”