Most of those convicted of terrorist attacks in the United States since 2001 entered the country through legal immigration avenues, according to a report issued earlier this month by the Department of Homeland Security (DHS) and Department of Justice (DOJ).

The report states that 402 of the 549 individuals convicted of terrorism between Sept. 11, 2001 and Dec. 31, 2016 are foreign born and legally entered the U.S. through the immigration system. The report added that, in that time period, the U.S. removed 1,176 foreigners who were on national security agencies’ radar. 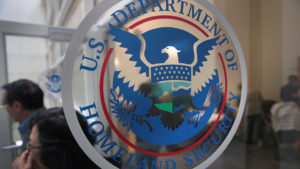 The report also stated that, between 2010-2016, the U.S. blocked 73,261 individuals who “may have presented an immigration or security risk” from boarding planes to the U.S. – an average of 49 per day.

“The United States faces a serious and persistent terror threat, and individuals with ties to terror can and will use any pathway to enter our country,” the DHS/DOJ report says.

“Accordingly, DHS has taken significant steps to improve the security of all potential routes used by known or suspected terrorists (KST) to travel to the United States to ensure that individuals who would do harm to Americans are identified and detected, and their plots are disrupted. These figures reflect the challenges faced by the United States and demonstrate the necessity to remain vigilant and proactive in our counterterrorism posture.”

Some of the terrorists came to the U.S. via chain migration, which allows immigrants to bring in as many family members as they want. President Donald Trump has made putting limits on chain migration a key component of his immigration reform strategy.

This DHS/DOJ report noted that Mufid Elfgeeh, a Yemeni national who was sentenced to more than 20 years in prison for attempting to recruit jihadists for Islamic State (ISIS), benefited from chain migration in 1997.

Mahmoud Amin Mohamed Elhassan, a Sudanese national who pleaded guilty to attempting to provide material support to ISIS, entered the U.S. in 2012 as a relative of a lawful permanent resident.

Other convicted terrorists took advantage of the Diversity Visa Lottery program to enter the U.S., the DHS/DOJ report said. Trump has also called for an end to that program.

Abdurasaul Hasanovich Juraboev, a national of Uzbekistan who was admitted into the country as a Diversity Visa Lottery recipient in 2011, was sentenced last year to 15 years in prison for conspiring to support ISIS.

Ali Shukri Amin, a Sudanese national who was admitted to the U.S. in 1999 as the child of a visa lottery recipient, was sentenced in 2015 to more than 10 years in prison for conspiring to provide material support and resources to ISIS.