The Department of Justice failed to deliver on a promise to turn over to Congress classified documents on the Trump-Russia investigation. The DOJ issued a press release around midnight saying it would miss the June 7 deadline. 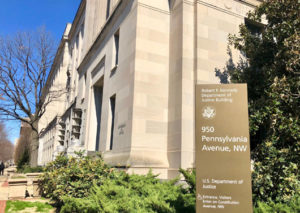 Instead, the DOJ said it will only meet with a group of select lawmakers early next week, possibly on June 12, the day President Donald Trump meets with North Korean leader Kim Jong-Un in Singapore, according to a report by investigative journalist Sara Carter, who cited numerous sources and a DOJ statement.

The Justice Department also issued new stipulations for briefing congressional members and limited the meeting with only the Gang of Eight, which is comprised of eight leaders within Congress who are briefed on classified intelligence matters, Carter noted.

A source familiar with the matter said “This request for documents is not at the Gang of Eight level. This is yet another line of obfuscation, stonewalling and delay tactics by the DOJ. They were supposed to deliver the documents to Congress Thursday and then at the last second did what they always do: fail to keep their commitment. Now they are waiting until the opening of the North Korea summit in an attempt to bury it from the public.”

Rep. Ron DeSantis, Florida Republican, told Carter “It’s the same old games and Congress is facilitating this behavior by continuing this back and forth with the Justice Department.”

DeSantis added, “American’s are upset about this and have every reason to be. They could’ve turned these documents over more than eight months ago and answered our questions and we wouldn’t be in the mess that we are in now.”

On May 24, House Intelligence Committee Chairman Devin Nunes, Rep. Trey Gowdy and Rep. Adam Schiff met with DOJ officials and FBI Director Christopher Wray to discuss Nunes’ demand, which was made on April 24, for specific classified documents related to the committee’s investigation into the FBI’s handling of the Trump-Russia investigation.

According to a source familiar with the discussions, the DOJ pleaded with the members, “not to say anything about the DOJ having brought the documents to the meeting,” Carter’s report said.