DOJ in letter admits surveillance of Trump campaign ‘not lawful’

The Department of Justice has admitted in a letter that two of the four FISA warrants obtained to spy on Trump campaign associate Carter Page were “not lawful.” The DOJ said it also is not defending the legality of the other two warrants. 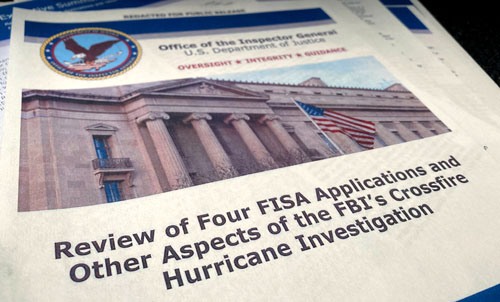 In a December letter to the FISA court which was declassified this week, the DOJ said that the FBI under disgraced former Director James Comey should have discontinued its secret surveillance of Page during the 2016 election because it had “insufficient predication to establish probable cause.”

“Thanks in large part to the work of the Office of the Inspector General, U.S. Department of Justice, the Court has received notice of material misstatements and omissions in the applications filed by the government in the above-captioned dockets,” the DOJ said.

“DOJ assesses that with respect to the applications in Docket Numbers 17-375 and 17-679, ‘if not earlier, there was insufficient predication to establish probable cause to believe that [Carter] Page was acting as an agent of a foreign power.’ ”

The DOJ’s letter stated: “The government further reports that the FBI has agreed ‘to sequester all collection the FBI acquired pursuant to the Court’s authorizations in the above-listed four docket numbers targeting [Carter] Page pending further review of the OIG Report and the outcome of related investigations and any litigation’. The government has not described what steps are involved-in-such sequestration or when it will be completed. It has, however, undertaken to ‘provide an update to the Court when the FBI completes the sequestration’ and to ‘update the Court on the disposition of the sequestered collection at the conclusion of related investigations and any litigation.’ To date, no such update has been received.”

The letter continued: “The Court understands the government to have concluded, in view of the material misstatements and omissions, that the Court’s authorizations in Docket Numbers 17-375 and 17- 679 were not valid. The government apparently does not take a position on the validity of the authorizations in Docket Numbers 16-1182 and 17-52, but intends to sequester information acquired pursuant to those dockets in the same manner as information acquired pursuant to the subsequent dockets.”

Last month, DOJ Inspector General Michael Horowitz reported a total of 17 “inaccuracies and omissions” that were made by the FBI in applying for FISA applications to spy on the Trump campaign.