Dog days: Streisand flies her pooches on private jet to see her sing in London

For Barbra Streisand it appears pampering her pooches takes precedence over saving the planet.

The liberal Hollywood icon, who often lectures America on the horrors of global warming in the Trump-era, flew her three dogs on a private jet to watch her sing in London, a report said. 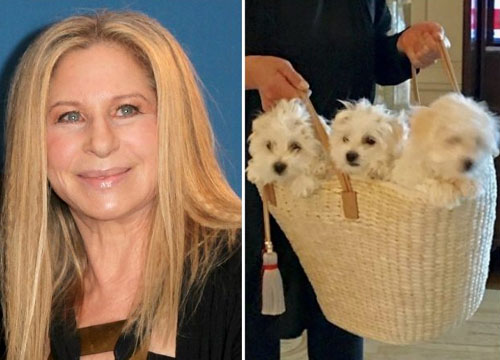 The carbon footprint was Godzilla-like. But the happy doggie paw prints were the priority.

According to The Sun, Streisand jetted her three Coton de Tuléar pooches — Miss Scarlet, Miss Violet and Fanny — on a 10,000-mile roundtrip flight to watch her perform at London’s British Summer Time concert on July 7.

“There was no expense spared for her three beloved pets in the backstage area,” The Sun reported. “They had free roam of her dressing room and a dedicated member of staff to push them in the buggy or walk them round at their free will.”

“Bringing some visitors to the show…” Streisand wrote in an Instagram post, which included a video of the pups (two of the Coton du Tulears are clones) and her entourage traveling in London.

Streisand has declared that all climate change deniers need to be voted out of office.

“Last week it was 114 in Paris and Guadalajara was buried in 3 feet of ice from a hailstorm. Climate change is here now and it is time for voters to remove the climate deniers from office. Starting with Trump,” Streisand tweeted earlier this month.

Writing for Breitbart News on July 10, Jerome Hudson noted that “Indeed Streisand’s 10,000-mile jaunts on carbon-pumping private jets only arm her critics with proof that her global warming alarmism is nothing more than hot air. And the Grammy-winning singer’s social media is a near-constant stream of climate change doom-mongering.”

Many observers noted the hypocrisy of Streisand’s June 30 tweet in which she said: “The blonde buffoon who can’t put one sentence together denies climate change! Greed and self interest take precedence as mussels are cooking themselves on the shores of California!”

From someone who put her dogs on a private jet for a 10,000-mile carbon spewing journey. Or, make that 10,800 miles. After a few days in London, Streisand and her dogs hopped in a private jet and flew another 800 miles to Saint-Tropez, France, Page Six reported.

“Among the worst of Trump’s legacies will be the denial of climate change and the increase in pollution,” Streisand said at the time.

To which some observers noted that in flying her dogs across the pond and back on a private jet, Streisand was responsible for more pollution on one round trip doggie adventure than the average person is in months if not longer.