Does U.S. speak with one voice on foreign policy? I don’t think so, says Donald Trump

Trump’s outspokenness has wrankled the Obama White House and set up a rare and public policy confrontation between outgoing and incoming administrations. 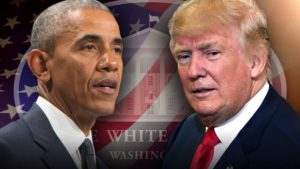 Trump said on Dec. 23 that he wouldn’t shrink from a nuclear-arms race, doubling down on his tweet a day earlier saying the U.S. needs to expand its nuclear capabilities. “Let it be an arms race,” Trump told MSNBC “Morning Joe” co-host Mika Brzezinski. “We will outmatch them at every pass and outlast them all.”

“There’s one president at a time,” said Ben Rhodes, Obama’s deputy national-security adviser. He said the president believes “it’s important that the world understands who is speaking on behalf of the United States until Jan. 20.”

Obama chose to break from longstanding U.S. policy and allow the anti-Israel resolution to pass.

Trump took to Twitter after the vote, saying: “As to the UN, things will be different after Jan. 20th.”

Trump made it clear soon after his election victory that he would take a different route during the transition when he took a protocol-breaking phone call from the president of Taiwan. The Obama White House was caught off guard and had to deal with what it said was an angry Beijing.

Jon Alterman, a national-security expert at the Center for Strategic and International Studies, said Trump appears to be using his transition to test the waters on some issues, the Wall Street Journal reported. “It feels to me partly like he’s just thinking out loud trying to imagine what a Trump foreign policy will be.”

Brian Katulis, a senior fellow focused on national-security issues at the Center for American Progress, a liberal think tank, said Trump is deviating from a longstanding tradition that ensures “continuity” in foreign policy even when the presidency changes parties.

“What he’s signaled on a number of different fronts since his election demonstrates that he has an unorthodox and unconventional way of dealing with the world,” Katulis said. “It’s deeply unsettling to a number of our longstanding partners.”

The president-elect is “basically signaling to the world the way he will conduct things once he is in fact president,” Duberstein said. “It’s reassuring to many of our allies and it is setting the stage for an understanding from our adversaries that there will be a new sheriff in town.”