Record numbers of children under the age of 18 were hospitalized due to colds because their immune systems were weakened by being forced to stay home and wear face masks during the Covid pandemic, a Yale doctor said, citing CDC data. 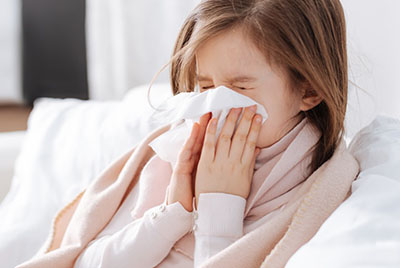 A CDC report released on Oct. 7 showed levels of common cold viruses hit their highest level ever among under-18s in August 2021.

“Experts have repeatedly warned lockdowns and measures used to contain Covid like face masks also suppressed the spread of germs which are crucial for building a strong immune system in children,” DailyMail.com reported.

The report noted that nearly 700 children were hospitalized with a respiratory virus across the seven wards studied in August of 2021, of which just over half had tested positive for respiratory syncytial virus (RSV).

“This was the highest levels ever recorded in summer, and came off the back of a year and a half of brutal pandemic restrictions forcing many to stay indoors,” Daily Mail online reported.

Dr Scott Roberts, a medical director at Yale University, told DailyMail.com that lockdowns robbed children of the chance to build up immunity to common bugs.

“There are two implications to this,” Roberts said. “First, the gap gives time for the viruses to mutate even further to cause more severe disease. And second, whatever immunity was built up to those viruses” will have waned making the immune response now much less potent.

Roberts also told DailyMail.com how his son, who has just turned two-years-old, was now repeatedly coming home with infections after starting daycare.

“We were pretty sheltered during the pandemic,” he said. “But now my son has just started daycare and he is getting constant infections.”

In the CDC study, scientists monitored hospitals in seven U.S. states for the number of children who had been admitted for respiratory illnesses.

All participants had at least one symptom of a respiratory disease including a cough, earache, runny nose, sore throat and shortness of breath, the report said. Each was then tested to determine which disease they had been infected with.

The data showed that among the nearly 700 who were hospitalized with respiratory illnesses in August 2021 nearly 55 percent tested positive for RSV. Of the 450 that were moved to emergency departments, nearly 35 percent had RSV.

The report does not include data for the rest of 2021 or into this year.

Medical professionals are reportedly concerned that pediatric hospitals will rapidly fill up with children ill with respiratory diseases much earlier than normally occurs.

“It is worrying experts about the winter, when these viruses normally spread, as it suggests there could be another wave of hospitalizations,” the Daily Mail noted.

Doctor attributes wave of hospitalizations of kids to weakened immunity from lockdowns added by Editor Two on October 7, 2022
View all posts by Editor Two →