The major U.S. media lauded the “passion and purpose” on the opening day of the Democratic National Convention, with some even moved to tears by Michelle Obama’s “pitch perfect” speech.

The contrast in coverage of the “dark” acceptance speech by Republican nominee Donald Trump was of the glass-half-full kind, and no one noticed that Islamic State of Iraq and Levant (ISIL) was not mentioned by any of the first day’s 61 speakers.

“Based on our searches of C-SPAN closed-captioning text, Congressional Quarterly transcripts and other video archiving services, we couldn’t find any speaker who mentioned “ISIL,” “Islamic” “terror,” “terrorist,” or “terrorism” during the first day of the convention,” Politifact wrote. 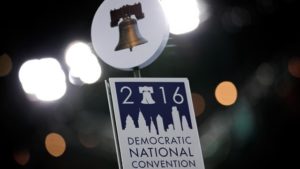 “We need to change our foreign policy to focus on defeating and destroying ISIL, a word you didn’t hear last night at the Democrat convention,” GOP candidate Donald Trump said. “You didn’t hear it. They don’t want to talk about it. Because in a very true way, they really established ISIL because of weakness.”

The Democrats’ day was all about, as Tom Brokaw put it, the “remarkable” and “exceptional” Obama family and, as Andrea Mitchell gushed “everything Hillary Clinton could have wanted, an unqualified endorsement,” from Bernie Sanders.

The angry Sanders supporters, devastating DNC email leaks and the Debbie Wasserman who? resignation were only a footnote if that.

Meanwhile, ISIL terrorists have increased the frequency of its attacks on Western targets with bloody attacks in France and Germany. But, yesterday in Philadelphia was neither the time nor the place.

Americans are feeling less safe and cops are being targeted, but the convention was filled with “a lot of charm and happiness,” as MSNBC’s Chris Matthews put it.

CNN’s Van Jones, who decried the GOP convention as a “hate-fest,” praised the Democratic convention’s tone on illegal immigration.

“What I saw last week, whenever you talked about immigration, it was almost a criminalization of that whole community,” Jones said. “Tonight you’re seeing a humanization of that community.” Most of the Anderson Cooper 360 panel concurred.