At least six Democrats will join all Republicans in voting against impeaching President Donald Trump, a report said. 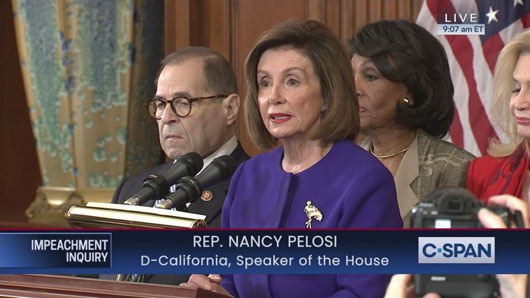 The Democrats are moderates who represent districts Trump won in the 2016 election. They are worried a vote to impeach the president could cost them their seats, The Washington Post reported on Dec. 11.

Articles of Impeachment are expected to come to the House floor for a vote next week.

The Post’s report said: “Lawmakers and senior aides are privately predicting they will lose more than the two Democrats who opposed the impeachment inquiry rules package in late September, according to multiple officials who spoke on the condition of anonymity to talk frankly. Two senior Democratic aides said the total could be as many as a half-dozen, while a third said the number could be higher.”

In the report, the Post said it confirmed that Democratic Rep. Jeff Van Drew of New Jersey will vote against Articles of Impeachment and Democratic Rep. Collin Peterson of Minnesota is leaning against impeachment. Both had voted against opening the impeachment inquiry.

The report added: “Several moderates have privately pined for other options, including a censure vote they know they’re unlikely to get. Others have even considered what one moderate called ‘splitting the baby’: backing one article of impeachment but not the other to try to show independence from the party.”

While it remains likely Articles of Impeachment will pass the House, it is all but guaranteed the U.S. Senate will not convict Trump.

To remove the president from office, the Senate would need 67 votes for conviction on Articles of Impeachment. There are 53 Republicans in the Senate, all of whom are aligned behind Trump at this stage.

Reports are saying that some Senate Democrats are potentially expected to join the Republicans, including Sens. Joe Manchin of West Virginia and Kyrsten Sinema of Arizona. Other Democrats who could join to shoot down the partisan House vote are Sens. Doug Jones of Alabama, Gary Peters of Michigan, and Jeanne Shaheen of New Hampshire.