This comes from the “trust the science” party.

The kind of devastation that was caused by Hurricane Ian can be prevented in the future if Americans just vote Democrat. 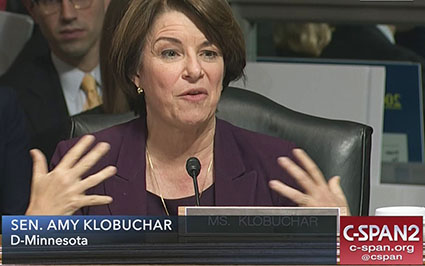 That it what Minnesota Democrat Sen. Amy Klobuchar seemingly suggested.

“We just did something about climate change for the first time in decades,” said Klobuchar on MSNBC’s “Morning Joe” on Tuesday. “That’s why we’ve got to win this as that hurricane bears down on Florida. We’ve got to win in the midterms. We understand that.”

“Here is what she is saying while SHAMELESSLY politicizing a major hurricane bearing down on our families here in Florida right now,” said former Congressman Trey Radel. “‘Give us — your trustworthy politicians — more money and we will fix the weather.’ ”

“The new science: so the hurricane is punishing Floridians for voting Republican, not because it’s a seasonal event and has been since before this grift,” former NRA spokeswoman Dana Loesch tweeted. “Nice sentiment @amyklobuchar as people are fleeing inland and praying they don’t lose their homes.”

“Disappointing,” tweeted Clifford May of the Foundation for Defense of Democracies. “I might have expected better from her. She’s supposed to be one of the adults in the room. Fact check: Nothing Biden has done or is doing will have any measurable impact on climate change. This is not in serious dispute.”

“This is why many people have such a hard time taking anything climate change seriously,” said NewsBusters managing editor Curtis Houck. “You have people who think a singular event means something far grander and sinister and spending money will thwart it.”

CNN personality Don Lemon was shut down when insisting to a climate scientist that there was indeed a link between global warming and Hurricane Ian.

“What effect does climate change have on this phenomenon that is happening now, because it seems these storms are intensifying,” said Lemon.

Lemon brushed off the comments of an actual scientist, adding: “Listen, I grew up there, and these storms are intensifying. Something is causing them to intensify.”

The Intergovernmental Panel on Climate Change said in its latest report that there is “no consensus” on the effect of climate change on Atlantic hurricane activity and, since 1900, there is “no trend in the frequency of USA landfall events,” including hurricanes.

“Nearly a Category 5 hurricane bearing down on Florida and all (rebranded?) CNN can think about is how to score political points by blaming Ian on climate change,” tweeted Maue. “Most certainly a time for that discussion, but not when people are in harm’s way.”