The FBI released 277 pages of redacted records in response to a Freedom of Information Act (FOIA) lawsuit that show the FBI failed to produce information from an August 2015 meeting with the Intelligence Community Inspector General (ICIG) about Hillary Clinton’s email server.

The FBI claimed that notes are “missing” and the CD containing notes from the meeting is likely “damaged” irreparably. 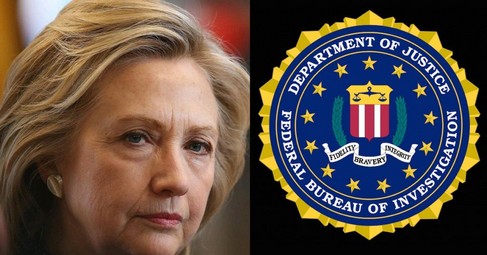 The records were obtained by Judicial Watch in a 2016 Freedom of Information Act (FOIA) lawsuit filed after the Justice Department failed to comply with a July 7, 2016, FOIA request for:

Included in the documents are February 2019 FBI electronic communications documenting the damaged CD and the missing notes from the August 3, 2015, meeting between FBI special agents and the ICIG about Clinton’s server:

The electronic communication regarding the missing “Notes from Meeting” says: “On or about February 4, 2016, Special Agents (SAs) [redacted] attempted to locate [redacted] 1A4, described as “Notes from Meeting” acquired by [redacted] (see referenced serial). The SAs looked through all case materials in the CI-13 file and workbox area, however they were not able to located this item.

“On February 6, 2019, SA [redacted] contacted SA [redacted] regarding the notes. SA [redacted] explained he documented all relevant case materials before leaving the case and did not retain any notes or other case materials. As such, WFO CI-13 considers the item missing and will enclose this document into 1A4 as a placeholder until the missing item is located.”

Republican Rep. Louie Gohmert, Texas Republican, said during a hearing with anti-Trump FBI agent Peter Strzok that in 2015 ICIG investigator Fred Rucker advised Strzok of an “anomaly” on Hillary Clinton’s emails going through the private server. The forensic analysis found that all of those emails except four – over 30,000 – “were going to an address that was not on the distribution list.” It was later reported that it was a “Chinese state-owned company” that hacked Clinton’s server. The ICIG referred the Clinton email investigation to the FBI on July 6, 2015, just under a month before the meeting for which the notes were “lost.”

The document production contains emails between Justin Cooper (the former close aide to Bill Clinton, who helped set up Hillary Clinton’s email system) and Huma Abedin regarding an attempted breach of the Clinton email server. On Jan. 9, 2011, Cooper emailed Abedin: “I had to shut down the server Someone was trying to hack us and while they did not get in i didnt [sic] want to let them have the chance to. I will restart it in the morning.” Despite Abedin’s having explicitly warned Sullivan and Mills that Clinton’s unsecure non-government server had been attacked, the documents contain handwritten FBI notes of Abedin’s 2016 FBI interview in which she told agents she didn’t recall any hacking attempts.

In a related case, Judicial Watch recently obtained documents from the DOJ showing that on Aug. 5, 2016 – a month after Comey’s exoneration of Clinton – FBI lawyer Lisa Page, Strzok and FBI official Jonathan Moffa were notified by a FBI assistant general counsel from the national security law branch that several FBI 302 interview reports were in need of processing: “Today [Redacted] brought over additional 302s from the WFO [Washington Field Office]. Are those supposed to go through the redaction process for production to DOJ on Monday? We’re trying to figure out what needs to be completed this weekend.”

Page responded by writing to Strzok, Moffa and others that four FBI 302 reports of interviews related to the Clinton “Midyear Exam” investigation had never even been written: “[Redacted] to the best of my knowledge, yes they will when Pete identified for [redacted] the DOJ edits that needed to be made to the 302s [redacted] discovered that there were four (I think) 302s that had never been written. What I don’t know is whose 302s they are but unless Pete or Jon are able to respond in short order, I would throw them on the pile for redactions. Thanks so much.”

Additionally, Judicial Watch recently filed a lawsuit against the Office of the Director of National Intelligence for details of a meeting with the FBI regarding national security threats associated with former Clinton’s “private” email system.

Judicial Watch on June 7 also released documents from the Department of Justice in response to a FOIA request showing the removal of Bruce Ohr from the position of Associate Attorney General in 2017; his transfer from Organized Crime Drug Enforcement Task Force to International Affairs in 2018; and that Ohr received a total of $42,520 in performance bonuses during the Trump/Russia investigation. Ohr’s bonus nearly doubled from $14,520 (received in November 2015) to $28,000 in November 2016.

The documents show that on Nov. 13, 2016, Ohr was given a performance award of $28,000. This was during the time of his deep involvement in the highly controversial Justice Department surveillance of the Trump presidential campaign. The bonus was nearly double the $14,250 performance award he was given on Nov. 29, 2015.

Bruce Ohr was married to Nellie Ohr of Fusion GPS and was removed because of his conflict of interest and role as conduit for Fusion GPS material. The documents show that Ohr was removed from his position as Associate Deputy Attorney General on Dec. 6, 2017. On January 7, 2018, Ohr was reassigned from his position of director of the Organized Crime Drug Enforcement Task Force (OCDETF) and shifted to Counselor for International Affairs in the Department of Justice Criminal Division. Ohr received a $2,600 pay increase.

“These documents will raise questions as to whether the conflicted Bruce Ohr, who the FBI used to launder information from Christopher Steele was rewarded for his role in the illicit targeting of President Trump,” stated Judicial Watch President Tom Fitton.

One of Judicial Watch’s FOIA lawsuits recently produced information from the DOJ showing a conversation between former Deputy Assistant Secretary of State for the Bureau of European and Eurasian Affairs Kathleen Kavalec Bruce Ohr, discussing the targeting of Donald Trump with Steele dossier material. In discussing a meeting with the potential source for a Mother Jones article accusing the Trump campaign of taking money from a Russian-American oil magnate, as well as Christopher Steele’s connection to that source, Kavalec emails Ohr citing the accusatory Mother Jones article. Ohr says, “I really hope we can get something going here.”

Also, Judicial Watch obtained an email revealing that Nellie Ohr, wife of Bruce Ohr, informed him that she was deleting emails sent from his DOJ email account. The full email exchange is between Bruce Ohr, Lisa Holtyn, Nellie Ohr, and Stefan Bress, a first secretary at the German Embassy, and is part of 339 pages of heavily redacted records from the U.S. Department of Justice.

Judicial Watch uncovered emails from Ohr showing that he remained in regular contact with former British spy and Fusion GPS contractor Christopher Steele after Steele was terminated by the FBI in November 2016 for revealing to the media his position as an FBI confidential informant. The records show that Ohr served as a go-between for Steele by passing along information to “his colleagues” on matters relating to Steele’s activities. Ohr also set up meetings with Steele, regularly talked to him on the telephone and provided him assistance in dealing with situations Steele was confronting with the media.