Dick Morris: How Trump cakewalks into the White House in 2024

Former President Donald Trump is uniquely situated to defeat the current Democrat administration and return to the White House after cakewalking to victory in the 2024 election, former Clinton administration adviser Dick Morris said. 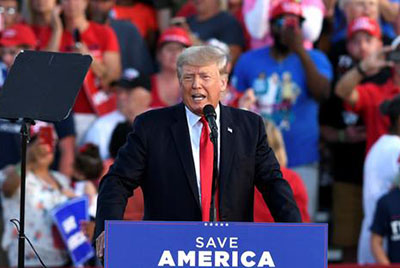 Trump will not only win, but will do so without anyone mounting a serious challenge for the GOP nomination in 2024, Morris said in an interview with Newsmax TV’s “Wake Up America” program on Sunday.

“The phrase is not ‘likely,’ the phrase is dead pipe certain: He’s certain to run, and he is, I believe, certain to get the Republican nomination,” Morris said. “I think he’ll actually get it by acclamation. I don’t think there’ll be a primary fight.”

Talk of Florida Gov. Ron DeSantis being a top challenger to Trump for the nomination is just that, talk, Morris told host Katrina Szish.

“Well, there’s a lot of Republicans who have sort of the 6-year itch,” Morris said. “You’ve heard of the 7-year itch. It’s been six years of Trump, but they’re flirting with DeSantis and other candidates, but only Trump can win this election.”

Morris continued: “First of all, only Trump can say, ‘I did it: You want to know if I can cut inflation or hold down gas prices, seal the border? I did it when I was president.’ So he’s sort of a hybrid: He’s half incumbent and half challenger. And secondly, he has an access to the Hispanic vote and to the white, high school-educated vote that other candidates really don’t have, and that gives him a tremendous capacity. So I think that only Trump can win, but don’t let it bother you DeSantis is not going to run.”

“The purpose of my book ‘The Return’ is to really explain how we’re going to do it. We are going to wage a campaign in ’24 totally unlike the campaign we waged in 2020, profiting from some of the mistakes that we made,” he said.

Dick Morris: How Trump cakewalks into the White House in 2024 added by Editor Two on July 18, 2022
View all posts by Editor Two →