Devil in the details: Preview of the great 2020 mail-in vote

“We’re ready to deliver for you. Make sure you’re ready too,” states a postcard from the Untied States Postal Service (USPS) pertaining to mail-in voting for the 2020 election.

The USPS postcard urges voters to request a ballot at least 15 days before Election Day, Nov. 3, and mail ballots at least seven days prior. 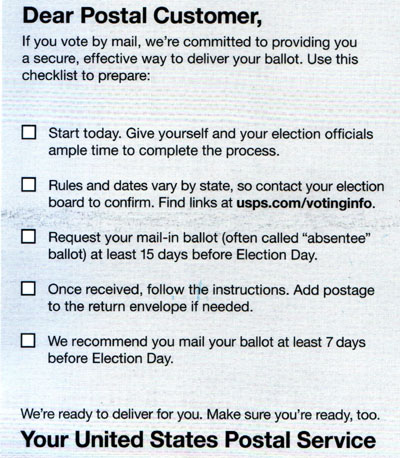 “Start today,” the USPS says. “If you vote by mail, we’re committed to providing officials ample time to complete the process.”

Following are key data points about a highly unusual election year in the United States.

An election official told The Washington Times that the assumption is Nevada voters received them and decided not to vote. Local newscasts showed undelivered ballots dumped in trash receptacles.