According to The New York Times and Washington Post, “fake news” played a significant role in the 2016 presidential election and could even have influenced the outcome.

In reality, however, the sites singled out have small audience shares and influence, according to Alexa analytics. 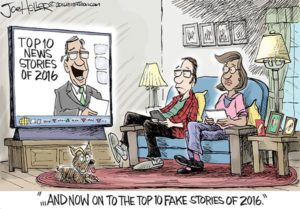 On Dec. 18, the Times devoted front-page coverage to a site called the “Patriot News Agency.” The Times’ story asserted that “operators of Patriot News had an explicitly partisan motivation: getting Mr. Trump elected.”

According to Alexa, “Patriot News Agency” ranks at 184,898 in web traffic in the U.S. The site’s Facebook page has 113 total likes.

Another fake news site, DenverGuardian.com, which received coverage from the New York Times and the Washington Post, is ranked 91,688 in web traffic.

Fake news site “MSNBC.com.co,” whose name is meant to fool readers into confusing it with MSNBC, received mentions from the Washington Post and Vox.com, among others. But “MSNBC.com.co” reaches a miniscule audience, according to Alexa’s data, which has the site ranked 549,714 in the United States.

Times’ headlines have included: “As Fake News Spreads Lies, More Readers Shrug At The Truth” and “Media’s Next Challenge: Overcoming The Threat Of Fake News”.

The Washington Post ran a piece with the title: “Russian propaganda effort helped spread ‘fake news’ during the election, experts say.” The Post walked back parts of the article after one of the websites named threatened to file a lawsuit.