DeSantis won’t ‘back down’ to media, ‘woke’ corporations on ‘anti-grooming’ legislation

“Woke” corporations and “false media narratives” will not stop Florida Republican Gov. Ron DeSantis from signing legislation he said is aimed at protecting young children in schools from “sexual instruction.” 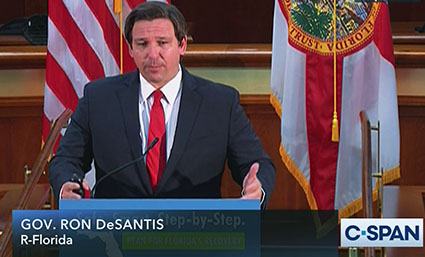 The text of the Parental Rights in Education bill (HB 1557) stipulates that “[c]lassroom instruction by school personnel or third parties on sexual orientation or gender identity may not occur in kindergarten through grade 3 or in a manner that is not age appropriate or developmentally appropriate.”

Disney CEO Bob Chapek reportedly told shareholders on Wednesday that Disney opposes the legislation which has been labeled by Big Media the “Don’t Say Gay” bill.

According to reports, Chapek said he had spoken to DeSantis and expressed “our disappointment and concern that if the legislation becomes law, it could be used to unfairly target gay, lesbian, nonbinary and transgender kids and families.”

In video obtained by Fox News, DeSantis says: “When you have companies that have made a fortune off being family friendly and catering to families and young kids, they should understand that parents of young kids do not want this injected into their kids’ kindergarten classroom.”

DeSantis also pointed out that Disney has long profited from its relationship with China, saying “they don’t say a word about the really brutal practices that you see over there at the hands of the [Chinese Communist Party].”

In a video exclusively obtained by @FoxNews Digital. @GovRonDeSantis slams #Disney saying “In Florida, our policies got to be based on the best interest of Florida citizens, not on the musing of woke corporations.” pic.twitter.com/Op87xgsLzB

Christina Pushaw, the press secretary for DeSantis, was slammed by the Left after tweeting that anyone who opposes the bill is “probably a groomer,” Political Wire reports.

“The bill that liberals inaccurately call ‘Don’t Say Gay’ would be more accurately described as an Anti-Grooming Bill,” Pushaw tweeted.

“If you’re against the Anti-Grooming Bill, you are probably a groomer or at least you don’t denounce the grooming of 4-8 year-old children. Silence is complicity. This is how it works, Democrats, and I didn’t make the rules,” Pushaw added.

Florida Democrat state Rep. Carlos G. Smith said Pushaw had “openly accused opponents” of the bill of being “pedophiles.” He described Pushaw’s comments as “disgusting” and “[b]igoted” and called for Pushaw’s resignation.

The apeshit national Democrat reaction to Florida’s anti-grooming bill proves which party is actively promoting the sexualization of young children, an activity which is barely one degree removed from pedophilia. No, it is not a good idea to be teaching gay and trans activism to five-year-olds. It isn’t a good idea to be teaching straight sex to five-year-olds, much less “exotic” sexual and lifestyle practices. There is absolutely nothing radical or improper in this bill. The only reason it seems novel is that until the Left in this country drove our culture straight into the toilet it was inconceivable that such a bill would even be needed. Now that the need is obvious, they want to act like it’s somehow bigotry to put a stop to the grooming of young children into nonconformist sexual lifestyles. The only reason anybody would oppose such action is they’re actively interested in promoting homosexuality and transgenderism to kids who can only be harmed by such activity. Monsters. And open about it.”

DeSantis won’t ‘back down’ to media, ‘woke’ corporations on ‘anti-grooming’ legislation added by Editor Two on March 11, 2022
View all posts by Editor Two →