Democrats object to reinstatement of citizenship question in 2020 census

North Carolina has joined 11 other states in a lawsuit filed in federal court seeking to block the Trump administration from adding a question about citizenship to the 2020 census, a report said. 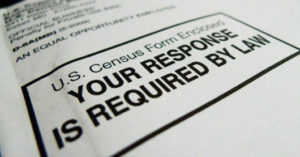 “That could threaten the fair allocation of hundreds of billions of dollars of federal grants and funding for education, roads and infrastructure, Stein and the other attorneys general stated,” the report said. “Additionally, census data are used to redraw political boundaries – from Congress to local school boards and commissions and allocate Electoral College seats.”

Stein said in a statement: “North Carolinians pay taxes to the federal government every year. In return, they rightfully expect to receive our state’s fair share of federal funding for our roads and schools and an appropriate number of Representatives in Congress. That’s what an accurate Census provides for and why I will fight any effort to politicize it.”

The National Review noted in an April 3 op-ed that “Some have attacked the decision on quasi-constitutional grounds. The census is principally for determining the apportionment of House representatives, and federal law requires the census to count citizens and non-citizens alike for that purpose. But it does not follow that the census must preserve public ignorance about the number of citizens. The two are not mutually exclusive, and this decision does not change the way representatives are apportioned.”

Commerce Secretary Wilbur Ross on March 26 announced the citizenship question would be included on the 2020 census in order to accurately measure the portion of the population eligible to vote.

The lawsuit says the new question “violates the constitutional mandate to conduct an ‘actual Enumeration’ ” of the country’s entire population, not just citizens, as well as a provision of the 1946 Administrative Procedure Act barring federal agencies from taking “arbitrary, capricious” actions.

The cities of New York City, Chicago, Philadelphia, Providence, San Francisco, and Seattle also have sued, as well as the U.S. Conference of Mayors.

The National Review noted that “Immigrants fearful of the Trump administration, the worry goes, will decline to fill out the survey, thus making the data less accurate and leading to an undercount. In addition to determining apportionment, the census affects the distribution of federal dollars and is used to enforce voting-rights laws, so it is reasonable to want its data to be as accurate as possible. But no evidence supports the claim that including the citizenship question on the census will have a significant effect on either its response rate or the reliability of its data.”