Debate No. 2: What Clinton and Trump actually said about key foreign policy issues and each other 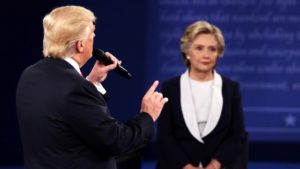 Here are some highlights of what they had to say on several central campaign issues during the showdown, including the recently leaked video in which Trump was heard talking about kissing and groping women and making other uninvited advances and Russia’s alleged attempts to influence the November 8 election with cyberattacks.

On alleged Russian hacking and relations with Moscow

Hillary Clinton: “Our intelligence community just came out and said in the last few days that the Kremlin, meaning [Russian President Vladimir] Putin and the Russian government, are directing the attacks, the hacking on American accounts, to influence our election…We have never in the history of our country been in a situation where an adversary, a foreign power, is working so hard to influence the outcome of the election. And believe me, they’re not doing it to get me elected. [The Russians] are doing it to try to influence the election for Donald Trump.”

Donald Trump: “I don’t know [Russian President Vladimir] Putin. I think it would be great if we got along with Russia because we could fight ISIS (Islamic State) together, as an example. But I don’t know Putin. But I notice anytime anything wrong happens, they like to say ‘the Russians.’ She doesn’t know if it’s the Russians doing the hacking. Maybe there is no hacking. But they always blame Russia, and the reason they blame Russia is because they think they are trying to tarnish me with Russia. I know nothing about Russia…I know about Russia, but I know nothing about the inner workings of Russia. I don’t deal there. I have no businesses there. I have no loans from Russia.”

On the video Of Trump making lewd remarks about women

Trump: “That was locker-room talk. I’m not proud of it. I am a person who has great respect for people, for my family, for the people of this country. And certainly, I’m not proud of it. But that was something that happened. If you look at [former President] Bill Clinton, far worse. Mine are words and his was action. His was — what he’s done to women. There’s never been anyone in the history of politics in this nation who has been so abusive to women…Hillary Clinton attacked those same women and attacked them viciously.”

Clinton: “I said starting back in June that [Trump] was not fit to be president and commander in chief. And many Republicans and independents have said the same thing. What we all saw and heard [in the video] on Friday was Donald talking about women, what he thinks about women, what he does to women. And he has said that the video doesn’t represent who he is. But I think it’s clear to anyone who heard it that it represents exactly who he is.”

On Muslim immigrants and Syrian refugees

Trump: “It’s called extreme vetting. We are going to areas like Syria, where they’re coming in by the tens of thousands because of [U.S. President] Barack Obama. And Hillary Clinton wants to allow a 550 percent increase over Obama. People are coming into our country, like we have no idea who they are, where they are from, what their feelings about our country is, and she wants 550 percent more. This is going to be the great Trojan horse of all time.”

Clinton: “I will not let anyone into our country that I think poses a risk to us. But there are a lot of refugees, women and children — think of that picture we all saw of that 4-year-old boy with the blood on his forehead because he’d been bombed by the Russian and Syrian air forces. There are children suffering in this catastrophic war largely, I believe, because of Russian aggression. And we need to do our part. We by no means are carrying anywhere near the load that Europe and others are.”

On the Syria conflict and Russia

Clinton: “I’ve stood up to Russia. I’ve taken on Putin and others. And I would do that as president. I think wherever we can cooperate with Russia, that’s fine. And I did as secretary of state. That’s how we got a treaty reducing nuclear weapons. It’s how we got the sanctions on Iran that put a lid on the Iranian nuclear program without firing a single shot. So I would go to the negotiating table [on Syria] with more leverage than we have now. But I do support the effort to investigate for crimes — war crimes — committed by the Syrians and the Russians and try to hold them accountable.”

Trump: “Now, [Clinton] talks tough. She talks really tough against [Russian President Vladimir] Putin and against [Syrian President Bashar al-] Assad. She talks in favor of the rebels. She doesn’t even know who the rebels are. Every time we take rebels, whether it’s in Iraq or anywhere else, we’re arming people. And you know what happens? They end up being worse than the people. Look at what she did in Libya with Qadhafi. Qadhafi’s out and it’s a mess. … I don’t like Assad at all, but Assad is killing ISIS. Russia is killing ISIS. And Iran is killing ISIS. And those three have now lined up because of our weak foreign policy.”

Trump: “If I win, I am going to instruct my attorney general to get a special prosecutor to look into your situation because there has never been so many lies, so much deception. There has never been anything like it…We’re going to get a special prosecutor and we’re going to look into it. Because you know what? People have been — their lives have been destroyed for doing one-fifth of what you’ve done. And it’s a disgrace. And honestly, you ought to be ashamed of yourself.”

Clinton: “That was a mistake. I take responsibility for using a personal e-mail account. Obviously, if I were to do it over again, I would not. I’m not making any excuses. It was a mistake, and I am very sorry about that. But I think it’s also important to point out where there are some misleading accusations from critics and others. After a yearlong investigation, there is no evidence that anyone hacked the server I was using.”

On what the candidates respect about one another

Clinton: “I respect [Trump’s] children. His children are incredibly able and devoted, and I think that says a lot about Donald. I don’t agree with nearly anything else he says or does. But I do respect that, and I think that is something that, as a mother and a grandmother, is very important to me.”

Debate No. 2: What Clinton and Trump actually said about key foreign policy issues and each other, WorldTribune.com