Many of those who stand to reap funds from American taxpayer coffers in the form of student loan forgiveness plan to spend it in true deadbeat fashion, according to a new poll. 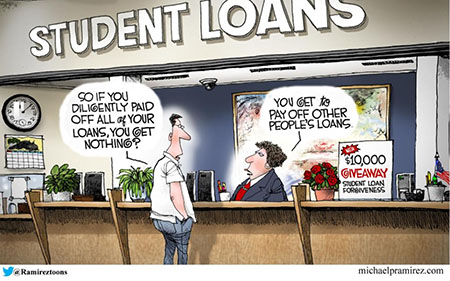 Nearly three-quarters of those set to receive up to $20,000 in tax dollars to cover their bad loans will use the cash windfall for vacations, booze, and drugs, according to an Intelligent.com poll.

The poll found that 73% of those applying for Team Biden’s student loan relief say they are likely to spend their extra money on non-essentials, including vacations, video games, gambling, and drugs/alcohol.

The plan would cancel up to $10,000 in federal student debt for borrowers, and offer an additional $10,000 of relief to borrowers who received Pell Grants.

“What they plan to spend the estimated $1 billion in tax dollars on is likely to irk many taxpayers, especially the vast majority who never went to college, took out a college loan, or paid the money back as they agreed to,” Washington Examiner columnist Paul Bedard noted.

Intelligent.com noted that “despite the fact that most don’t plan to practice what they preach, 73% do agree using student relief to buy non-essential goods is wrong. Even though they are more likely than women to spend money on all of the items we asked about, 80% of men say spending on non-essentials isn’t the right thing to do compared to 67% of women.”

The poll added that it is “worth noting,” that many on the receiving end of the Team Biden bailout say they are likely to use the money on essential purchases such as groceries, rent/mortgage payments, credit card debt, transportation-related costs, medical care/debt, and childcare.