De-pressed? The media has embarrassed itself right out of contention in Campaign 2016

Perhaps not since 1936 has there been such an abject failure through prejudicial media reporting of a presidential election.

Then, the enormously popular weekly, The Literary Digest, predicted a strong victory for the Republican conservative candidate Kansas Gov. Alf Landon against Franklin Delano Roosevelt. FDR bidding for a second term was pushing a radical program against traditional opposition in his own party, the Congress and the courts.

The landslide victory for Roosevelt that followed – every state but Maine and Vermont – so invalidated the magazine’s reputation that it collapsed and disappeared. 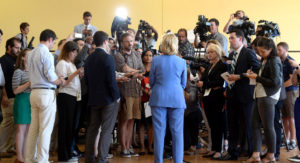 One has to wonder if such a fate would befall one of the many media sources today or whether it would just continue to blather on.

For what we see in media today is so slanted that it has further alienated an already antagonistic general public which has long since lost all respect and faith in it.

CNN and NPR’s support of Hillary Clinton – but much more their tortured attempts to avoid any negative reporting about her many recent pratfalls – is outrageous. And they are followed by the rest of the mainstream media with the exception of Fox News whose effort to maintain some semblance of balance makes them appear pro-Trump.

It is hard to know what has given us this kept press. Is it that the members of the media – with their [often literally] incestuous relationships with the Democratic Party, the Obama Administration and the “Inside-the-Beltway” elite — simply is reflecting their own prejudices?

Certainly were that the case they would be overwhelmingly antagonistic to Donald Trump’s politics as a matter of custom rather than reflective partisanship; his perceived gaucherie and outside the Beltway language would be enough to condemn him.

Or is it that the media, as part of a self-appointed elite, is ideologically disposed toward an anti-Trump position, even into support for Hillary Clinton if for no other reason than she seems to reflect the same attitudes?

Trump, right or wrong, has ferociously attacked some of the shibboleths of the ruling national political machine for the last half century. He has fed everything from “free trade” to “international cooperation” into the maw and put them up for grabs, revision or disabuse.

The outcome of any debate he has touched off is much less important than the dust he has kicked up by even bringing the issue to a question and deliberation.

There is genuine concern in some quarters, not those who accuse him of being another Hitler, that he is removing the foundations of the long period of relative peace which has endured since August 1945.

The Korean War and the Vietnam War were bloody interjections in this era, of course, but however bitter was their warfare and the political conflicts around them, they did not represent the horrors of World Warr I and II with its virtually destruction of whole generations of young European men. And the prospect of an even more destructive World War III was held at bay.

The way the anti-Trump media have seized on what are obviously elliptical or misspoken bits and pieces of Trump’ endless stream of consciousness chatter is not only unprofessional but criminal.

It was obvious, for example, that when he mentioned the complicated idea [in a phrase], he meant that the enormously powerful following for the Second Amendment possibly could neutralize a roster of liberal judges Clinton as president would put on the Supreme Court.

Yet almost the entire media were determined to make the phrase an indication that he was calling for assassination using the constitutional right for individuals to bear arms.

A sarcastic reference to the possibility that Vladimir Putin might release e-mails Clinton had destroyed since the Russians were presumably hacking her non-official server and her various devices was turned into an appeal on Trump’s part for Moscow’s intervention in a purely American political fracas.

These are petty offenses. But multiplied as they are almost daily by other inferences and innuendos they add up to a prejudicial presentation of the presidential debate.

It remains to be seen whether, given the low rating all polls attribute to the public’s respect and credence for the media, it will be more than a minor part of the growing circus that is our presidential election.

De-pressed? The media has embarrassed itself right out of contention in Campaign 2016, WorldTribune.com