Ruling establishment think tank the Brookings Institution has an interesting disclaimer tacked onto the end of an April 18 article on its website:

Now let’s go back to the top, and the lead paragraph:

A great reckoning has arrived for content moderation in podcasts. Just as Facebook, Twitter, YouTube, and other digital platforms have struggled for years with difficult questions about what content to allow on their platforms, podcast apps must now weigh them as well. What speech should be permitted? What speech should be shared? And what principles should inform those decisions? 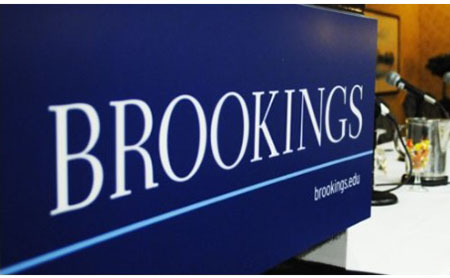 This is how canned the control apparatus has become. Big Tech funds DC think tanks that churn out “deep thoughts” about the dire necessity for Big Tech to censor free speech.

It’s astonishing to see the regime drones at Brookings so boldly put forward their partisan political stances as settled fact and decree that any disagreement is beyond the pale of reasonable public discourse.

It would be humorous if one didn’t pause to consider that this is precisely how the installed Biden administration has been operating for more than a year now.

A Jan. 13 podcast is titled: “The Role of Podcasters in Spreading the ‘Big Lie.'” A summary reads:

In the aftermath of the 2020 election, many popular political podcasters used their platforms to spread the idea that President Joe Biden’s victory was illegitimate and that he had won due to widespread voter fraud. Collectively known as the “Big Lie,” these narratives around the election played a key role in fomenting the Jan. 6 assault on the U.S. Capitol, yet the role of podcasts in spreading this conspiracy theory has been relatively unexamined.

What is “collectively known” within the stale, incestuous circles of the Swamp is presented as indisputable truth, with the subject matter immediately turning to dropping a hammer on those who would dare go against it:

In this week’s episode of Lawfare‘s Arbiters of Truth, Valerie Wirtschafter, a senior data analyst at the Brookings Institution, and Chris Meserole, a fellow at Brookings and the director of research for the Artificial Intelligence and Emerging Technology Initiative, discuss their recent study of the role played by podcasts in spreading election fraud narratives and the challenge of content moderation in podcasts.

Russia is of course another settled matter according to the Arbiters of Truth. Special counsel John Durham’s investigation has revealed the key role played by The Brookings Institution in furthering the Trump-Russia collusion hoax.

In recent weeks, Russian officials and state media have seized on a fresh piece of disinformation to justify the invasion of Ukraine: that the United States is funding the development of dangerous biological weapons in Ukraine. This claim, which has no basis in fact, has not been confined to Kremlin propaganda. Popular podcasters in the United States have repeated and promoted it for their own purposes.

The coronavirus hysteria is also tossed into the fray:

Amid a reckoning over the role of podcasts in disseminating coronavirus-related misinformation, the promotion of this conspiracy theory by prominent American podcasters is the latest example of how podcasting has become a powerful and largely overlooked vector in the spread of mis- and disinformation.

Podcasts are generally not a “social” media. There is no clear, built-in mechanism for listeners to comment on or push back against the information contained in any given episode and few ways for fact checkers to identify, never mind reach, a podcast’s audience. Although anyone can be a podcaster, the medium has more in common with radio broadcasting than other new media platforms, but without well-developed normative constraints on the sharing of false or misleading information.

Are we exaggerating by using the term “elites?” Here is the Brookings bio of Jessica Brandt, one of the co-authors of this authoritarian diatribe:

Jessica is a member of the advisory council of the American Ditchley Foundation and a David Rockefeller fellow of the Trilateral Commission. She was a term member of the Council on Foreign Relations and a Next Generation Fellow at the Center for a New American Security.

Co-author Valerie Wirtschafter also is connected to the Council on Foreign Relations.

Back to the April 18 article on policy recommendations for cracking down on independent podcasters who think bad thoughts and even say them out loud. By the way, did we mention that co-author Chris Meserole is an adjunct professor at Georgetown University?

Again, the candor is remarkable:

Although there are insights to be gleaned from these ongoing discussions, addressing the spread of hate speech, misinformation, and related content via podcasts is different than on other social-media platforms. Whereas digital platforms host user-generated content themselves, most podcasts are hosted on the open web. Podcasting apps typically work by plugging into an external RSS feed, downloading a given podcast, and then playing it. As a result, the main question facing podcasting apps is not what content to host and publish, but instead what content to play and amplify.

Making those determinations is far from straightforward, of course, but the challenge is not an intractable one. From new policies and user interfaces to novel regulatory approaches, the podcast ecosystem can and should employ far more robust content-moderation measures.

The Brookings apparatchiks then link to a 2020 article written by Daphne Keller, the former Associate General Counsel for Google, who asserted:

What should platforms like Facebook or YouTube do when users post speech that is technically legal, but widely abhorred? In the U.S. that has included things like the horrific video of the 2019 massacre in Christchurch. What about harder calls – like posts that some people see as anti-immigrant hate speech, and others see as important political discourse?

Some people? The sheer arrogance involved in defining the terms of what is and is not acceptable speech speaks volumes about Big Tech’s throttling of conservative voices today.

Keller goes on to present numerous “kick the tires” (her words) ideas for suppressing free speech. She clearly lays out a path that has been especially favored by Facebook and Twitter: totally suppressing content so that it is extremely difficult to be seen even though it is not banned:

Another model might target recommended, ranked, or amplified content, applying different rules to different aspects of platforms’ operations. As Tim Lee put it, we could “think of Facebook as being two separate products: a hosting product and a recommendation product (the Newsfeed).” Applying different rules to hosting on the one hand and amplification on the other would allow for somewhat more nuanced legal regimes….

A must-carry version of this rule might require platforms to keep hosting all legal speech, but let them apply their own rules to ranking, recommendation, or amplification systems….

But it would still require extensive and ongoing regulation, with resulting distortion of market incentives and innovation, to decide what counts as the “infrastructure” and “edge” aspects of any given platform. Would your racist uncle’s tweets simply never appear in your feed but be visible on his profile page, for example? Be hidden from the casual visitor to his profile page but findable through search? If Google dislikes the only web page that has the text string “fifty purple pigeons eat potatoes,” could it rank a hundred other pages above it when users search for those exact words? There are a thousand variants to these questions, all of which will matter to someone. I don’t see clear or easy answers.

This, of course, is exactly what Big Tech is doing right now with social media and Internet searches. And Brookings would dearly like it to be applied to podcasts as well.

Anyone who has paid attention to the tone emanating from the Biden White House over the past 16 months should understand that a ruling establishment is endeavoring to set up and solidify a control regime. From Joe Biden saying “we gave everyone ample time and information to deal with their concerns” in his infamous October 2021 speech on rolling out federal coronavirus vaccine mandates to Attorney General Merrick Garland labeling parents as possible domestic terrorist threats for daring to question their local school boards, the rhetoric has been ruthlessly authoritarian from the beginning.

The ruling establishment does not want the American people to have the basic freedoms they once took for granted as their birthright. The stunning honesty of the Brookings Institution attack on podcasts is merely another echo of that which the installed Biden administration has been projecting all along.